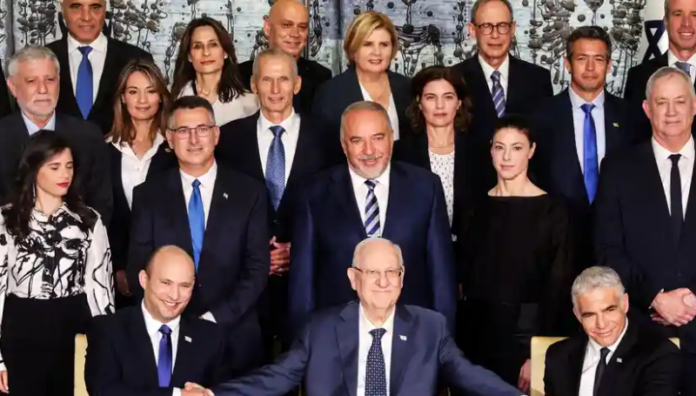 Israeli Election Candidate Spotlight: MK Naftali Bennett.mp4:  Jinsa, Mar. 4, 2021 – Naftali Bennett on Netanyahu, Iran, the Palestinians and other Issues.  As Israel’s new government takes office, JINSA is circulating a recent webinar it conducted with incoming Prime Minister Naftali Bennett. The March 4 webinar provides important insight into Bennett’s views on outgoing Prime Minister Benjamin Netanyahu, Iran, the Palestinians and other issues, at an especially critical time for the U.S.-Israel relationship and the future of the Middle East.

Naftali Bennett, The Political Gambler About To Deal Netanyahu Out

Israel’s New Gov’t, Jordan And The Rest Of The Middle East – Analysis:  Seth J. Frantzman, Jerusalem Post, June 14, 2021 — Israel’s new government faces many hurdles as it struggles not only to maintain a coalition, but also to navigate a complex and changing Middle East.

The Truth About Israel’s “Unity” Government:  Caroline Glick, Caroline Glick Blog, June 8, 2021 – In Episode 9 of the Caroline Glick Mideast News Hour, my co-host Gadi Taub and I go into the nuts and bolts of the new Israeli government that is set to be sworn in next Sunday, June 14. We explain why it is post-modern, post-Zionist, post-democratic and post-Jewish and what this means for Israel’s national security, national identity and national sanity.

Haley In Israel: The People Of Israel Always Celebrate Life:  Erez Linn, Israel Hayom, June 13, 2021 — Former US Ambassador to the United Nations Nikki Haley joined Evangelical leader Pastor John Hagee, the founder and chairman of Christians United for Israel, on a solidarity mission to the Jewish state over the weekend.

Omar Forces Jewish Democrats To Make A Tough Choice:  Jonathan S. Tobin, JNS, June 13, 2021 — After a surge in violent anti-Semitism inspired in no small part by vicious attacks on Israel by members of their party’s left-wing, some Jewish Democrats have had enough. After Rep. Ilhan Omar (D-Minn.) compared the United States and Israel to Hamas and the Taliban, the 25 Jewish members of the House of Representatives who are Democrats (two others are Republicans), met informally. Their discussion focused on whether it was time to rebuke Omar by name for her latest effort at demonizing the Jewish state, as well as besmirching the United States.

isranet org
Previous articleNaftali Bennett, The Political Gambler About To Deal Netanyahu Out
Next articleSaudi Crown Prince’s Decision May End his Country’s Support for Wahhabism

MEDIA-OCRITY OF THE WEEK Is There Really Such A Thing As ‘The American People’?:  Mark Kingwell, Globe and Mail, July 31, 2021“ the expression ‘the American people’. If you...
Read more
Isranet Daily Briefing