The Emerging Unholy Alliance between Russia, Turkey and Iran 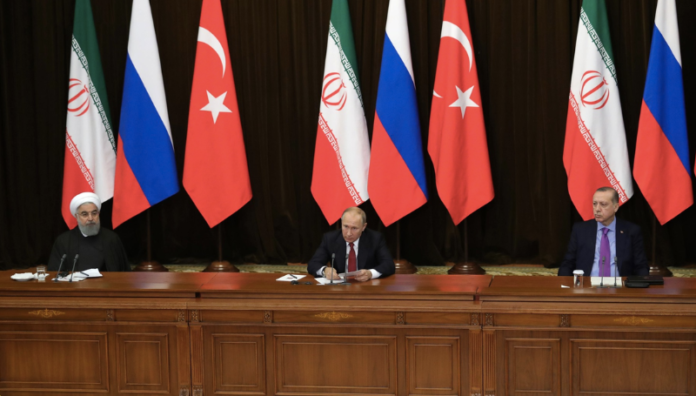 “Iran must be made to understand that it cannot continue to expand its influence and aggression in the region, detach Turkey from the Western orbit or find new ways to evade Western sanctions.”

Less than a week after U.S. President Joe Biden left the Middle East following a visit that focused on the informal Israeli-Sunni Arab alliance in the region, Russian President Vladimir Putin boarded a plane to Iran, the leader of the opposing Shi’ite axis. Turkish President Recep Tayyip Erdoğan of Turkey joined the summit in Tehran.

The three regimes represented in Tehran are not friends of the West. Russia is engaged in a brutal war against Ukraine and dishes out threats to European countries on a weekly basis. Iran funds terrorist proxies across the Middle East, has a robust nuclear weapons project, and has stated many times that it seeks the complete annihilation of the United States and Israel. Finally, Turkey has proven itself an unreliable partner of the West on core issues such as sanctions on Russia, use of Russian defense systems, support for malign Iranian activities and more.

Putin’s summit has worrying implications for the Middle East. It appears that an anti-American alliance is forming at the behest of Russia and China, and it includes Iran and its terrorist proxies. As a result, Iran could soon find itself comfortably exporting oil and weapons and attracting foreign investments, despite Western sanctions. It might well become self-sufficient within its bloc of allies, leaving the West unable to pressure Iran on its nuclear program and other malfeasances.

U.S. National Security Advisor Jake Sullivan revealed last week that Iran already feels emboldened enough to send sophisticated weapons systems to Russia. Putin said last week in Tehran that Russia-Iran relations “are developing at a good pace,” adding that the countries can “boast of record figures in terms of trade growth, including the strengthening of cooperation on international security issues.”

isranet org
Previous articleTurkey’s Concerns About PKK are Not Legitimate
Next articleWill the Putin-Erdogan-Raisi Summit Spark a Turkish Incursion into Syria?

Nathan Lewin WSJ, July 7, 2022 “Orthodox Jews can now push to establish local laws like those nullified by the court’s 1971 decision, which would provide...
Read more
Analysis

Is the Jewish Democratic Council Really Jewish – or Just Democrats?

Alan Dershowitz Gatestone Institute, Aug. 3, 2022 “It is difficult to imagine any other ethnic or other group of Democrats -- Blacks, Arabs, gays -- that...
Read more
Analysis

Jewish Education Should Have ‘Shoulds’

Benjamin M. Jacobs and Shuki Taylor Sapir Journal, Vol. 6, Summer 2022 “The universalization of Jewish education is built on the premise that a program can...
Read more