Speaker Pelosi Can either Reject Antisemitism or Tolerate it 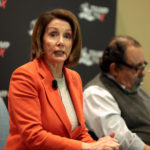 Speaker Nancy Pelosi did the right thing and spoke at the annual AIPAC Policy Conference in Washington D.C, even when a number of Democratic candidates for the U.S. presidential elections announced their intention not to attend.

“Israel and America are connected now and forever,” Pelosi said during her address. “We will never allow anyone to make Israel a wedge issue.”

But this still does not change the fact that it was Pelosi who appointed newly elected Congresswoman Ilhan Omar to the House Foreign Affairs Committee. This happened after Omar defended her comment on Twitter accusing Israel of having “hypnotized the world.”

Aside from invoking an antisemitic trope steeped in centuries of bloody history, Omar also supports the anti-Israel BDS movement that singles out Israel for economic isolation while ignoring the atrocities committed against women, minorities and the LGBTQ community by the Arab and Muslim world.

During the 2018 Israeli-American Council National Conference, Pelosi pushed back against concerns that her party has become increasingly anti-Israel by listing pro-Israel lawmakers she planned to name to key committee positions. However, this is inconsistent with her decision to reward Omar with such a powerful appointment. Pelosi even refuses to condemn the virulent antisemitism of newly elected Michigan Congresswoman Rashida Tlaib, who literally wiped Israel off the map in her congressional office, endorses the BDS movement and has called for Israel’s destruction through the so-called “one-state solution.” …Yet Pelosi remains silent.

Sadly, the issue of Democrats embracing antisemites is nothing new. In February 2017, Congresswoman Jan Schakowsky (D-IL), who represents one of the largest Jewish constituencies in the country, led a protest over President Trump’s travel ban. During the rally, Schakowsky shared a stage with Rasmea Odeh, the convicted mastermind of a 1969 Jerusalem terrorist attack that took the lives of college students Edward Joffe and Leon Kanner. At no time did Schakowsky explain her decision, nor was she reprimanded by Pelosi and Democratic leadership.

While Pelosi herself may condemn Nation of Islam leader Louis Farrakhan, the Democratic Party’s obvious willingness to tolerate antisemitism is decaying the party from within. It was disclosed in 2018 that 21 Democratic members of Congress attended a secret meeting with Farrakhan in 2005 (which also included then-senator Barack Obama). Today, there are seven House Democrats that still refuse to denounce Farrakhan’s Jew-hatred and proudly call him a friend.

A real friend of Israel and the Jewish people would find Omar’s and Tlaib’s antisemitism intolerable and any sort of association with racists like Farrakhan unacceptable. Rather than promote someone who believes that Israel is “evil”,… Pelosi could learn a thing or two from the GOP’s rebuke of Rep. King. Her mixed signals are either empty platitudes or symptoms of an addled mind.

(Bradley Martin is Deputy Editor for the Canadian Institute for Jewish Research and a Senior Fellow with the news and public-policy group Haym Salomon Center.)