IfNotNow: Intervention in the Guise of Peace

While it was founded in response to the IDF’s Operation Protective Edge in 2014, IfNotNow has broadened its activities and intensified its campaign to change the course of US foreign policy in the Middle East, as well as change the attitudes of North American Jews towards supporting Israel. Much of the organization’s founders and members such as the now infamous Max Berger are alumni of J Street, the controversial left-wing supposedly pro-Israel lobby. Another founder, Simone Zimmermann, was president of J Street U, the university campus organizing arm of J Street.

Beyond influencing US attitudes towards Israel, this article examines how IfNotNow uses emotional blackmail to dictate foreign policy abroad and disrupt the due process of the law at home. Furthermore, I will examine how IfNotNow wins the trust of American citizens by marketing itself as a human rights movement as opposed to the pernicious tendril of the totalitarian tree from which it stems. I include under the umbrella of IfNotNow the “new” so-called movement “Never Again Action”: Rather than presenting a fresh look at the issue of migrants from Latin America, this organization embodies a new layer of the serpent’s skin.

IfNotNow began masking its activities as part of the Momentum Community network by creating the new front group Never Again Action that distinguished itself by protesting the detainment of illegal immigrants into the US in Milwaukee, WI #JewsAgainstICE . It is admittedly impressive that an organization that draws its membership mainly from posh private liberal arts colleges such as NYU’s Gallatin School and Swarthmore can pass itself off as an expression of the popular will of Jewish Americans, let alone Americans at large. In the July 17th issue of Jewish Journal columnist Ariel Sobel stated falsely that “Unlike many other protests, Never Again Action (NAA) is not an arm of another organization.” Yet, he disproves this claim by noting that NAA’s training is conducted by Serena Adlerstein, a full-time activist for Movimiento Cosecha. In 2017, Cosecha was disclosed to have received $236 thousand from the Ayni Institute, the very same organization that spawned the Momentum Community (also receiving $191 thousand in 2017). Max Berger is also a trainer for Momentum. In a training conducted in 2016 another IfNotNow founder and trainer for Momentum, Lissy Romanow, even admits that activists “change t-shirts,” and take part in the activism of other movements to maintain the appearance of broader support. The idea that these dilettantes are viewed as human rights activists is laughable; that the Jewish “leadership” does not see through this charade makes one question how they attained their lofty positions.

On July 10, one of IfNotNow’s activists, Becca Lubow successfully squeezed a viral soundbite out of presidential candidate Sen. Elizabeth Warren (D-Mass) who publicly committed to “ending the occupation” of Palestine by Israel, should she be elected president. If this incident sounds unusually serendipitous, this is because it was likely not a surprise meeting. One of Warren’s aides is none other than Max Berger. 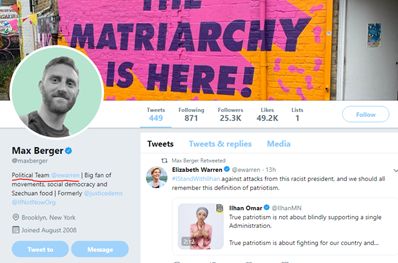 What happens, though, when these naïve activists do not receive the answer or soundbite they want? On July 17, the pro-Israel Jewish Press published an article documenting occasions when IfNotNow was rebuffed to one degree or another by three candidates who they approached:

Let us focus, however, on a significant encounter between IfNotNow activist Aviva Schwartz and ex-Rep. Robert F.  “Beto” O’Rourke (D-TX) and its implications for American foreign policy. In the clip, Schwartz begins with a heart-wrenching story of having witnessed a Palestinian youth being physically manhandled by an Israeli soldier during her recent trip to the West Bank and juxtaposed it with caring for her niece who is growing up in Israel, and for whom she cares deeply. O’Rourke empathized with her experience, then went on to cite a personal visit he made to the Dolphinarium club in Israel, the site of a suicide bombing in 2001 that killed 20 Israeli revelers, mostly immigrants from the former USSR.

To his credit, O’Rourke responded sensibly, even asserting that “we cannot impose that solution on anyone”, referring to the two-state solution. If Israelis and Palestinians are to arrive at a peace agreement, both must want it, he implied. His response, though, wasn’t good enough for Mme. Schwartz. She wanted Beto, should he become president, to commit to a proactive approach to ending the occupation.  Imposing a solution to this decades- old problem is not within the president’s purview; nor should it be. On the contrary, today many Americans are more aware than ever that the US’s involvement in other countries’ affairs has often made us the bogeyman of the world.  And that’s where my questions begin.

The unforeseen consequences of a coerced solution

It’s not as if the US didn’t try to bring about a diplomatic solution to the Israeli Palestinian issue. The US began brokering peace talks between the two warring parties since at least 1993 (the Oslo Accords), and further between Israel and the Arab States since 1969 (the Rogers Peace Plan). Do any of these IfNotNow activists credit presidents Nixon or Clinton for those efforts?

What IfNotNow really wants is to punish Israel for its “abuse” of the Palestinians. What, though, is an appropriate punishment? Revoking favourable votes in UN bodies? Cutting back on foreign aid? How far are they willing to go? Obviously quite far. Would these moral champions be willing to go so far as to create trade tariffs against Israel, or to sanction it economically and politically? That is, after all, the S in BDS that many (if not all) of the IfNotNow activists support.

Strictly from a strategic standpoint, why should the UU want to get into further disputes with another nuclear power and ally such as Israel, in addition to its existing disputes with other countries such as China, Russia, and North Korea? A major criticism of the current president is that he cannot get along with our allies; IfNotNow’s demands will likely lead to a more significant rupture. President Obama nearly ruined the US relationship with the Philippines in 2016 by dictating terms to President Duterte regarding his war on drugs.

To be sure, if I may inject my personal beliefs, many isolationist Americans don’t object to ending American foreign aid to foreign governments, whether it is Israel, Turkey or Pakistan. There is a vocal but growing minority spanning the political spectrum that rejects the notion that America must prop up its allies financially like Atlas shouldering the globe. Throughout the years, many of these same voters supported candidates such as Pat Buchanan on the “right” and Tulsi Gabbard on the “left”. But that’s not what IfNotNow is demanding. It is no more moral and ethical to “end the occupation” by imposing a solution on Israel than it was for the US to intervene in any of the other conflict zones from Kosovo to Iraq to Yemen that most progressives cite as examples of American imperialism. This solution just doesn’t work. The British “imposed” an end to their rule over India by splitting South Asia between Hindus and Muslims, yet the resulting nation states are no closer to harmony than they were in 1947. Yet, as regards the Israeli-Palestinian conflict this far-left organization switches its ideology in support of intervention. Why is IfNotNow not asking for the end of the occupation of Kashmir by Pakistan and India?  What is it not confronting Beto on that? Have any of these high-minded people asked whether America’s involvement does more damage than good?

What is more, “support for Israel” is defined in purely militaristic terms, while “support for Palestinians” can only be expressed through the delegitimizing the political and economic standing of Israel.

Finally, the term “ending the occupation” remains open-ended. What, for instance, will replace the current political reality?  The corrupt Abbas government that even rabid anti-Israel lawyer and former PLO spokeswoman Diana Bhuttu declared in 2017 should be shuttered? How about the theocratic Hamas movement (or another Islamist group) that seized control of Gaza over a decade ago? Telling Beto O’Rourke to “end the occupation” is like demanding that a pilot take off without pressurizing the passenger cabin and doing the other pre-flight preparations. The end result will assuredly be catastrophic for Israel, Palestinians, and the Middle East.

Note: For more information on the origins of IfNotNow please refer to the author’s previous article