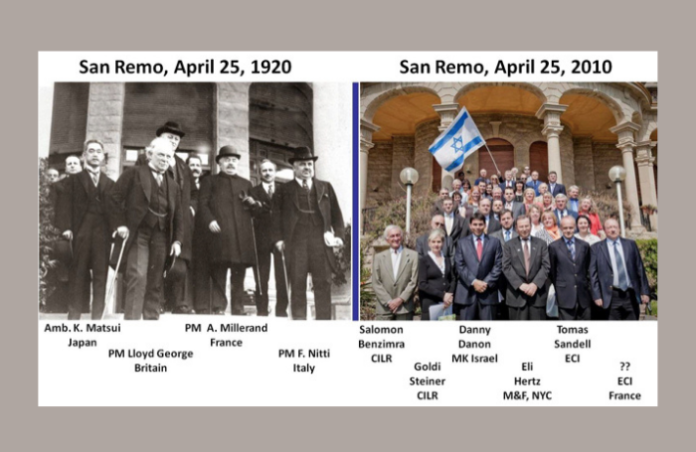 “Why is Educating about Israel’s Rights to the Land More important Now Than Ever.“

In 1917, in the sleepy little town of San Remo, Italy, the most meaningful event in modern Jewish history took place: The Balfour Declaration became a legal document.  Until then, it was merely an expression of British policy, which had extended international recognition on Palestine. After San Remo, the Jewish people received sovereignty entitlements in Palestine, and the Arabs equivalent entitlements in Syria, Lebanon, and Mesopotamia (Iraq)

On April 25, 1920, following WW1 and the breakup of the Ottoman Empire that had until then occupied Palestine and many other counties, the League of Nations was created:  Its Covenant reflected the principle of “self-determination” advocated in President Wilson’s Fourteen Points.

On July 24, two years after the League of Nations passed the San Remo Resolution, it confirmed the Mandate for Palestine, which was later unanimously approved by the League’s 52 members.  The Mandate entered into force in 1923, fulfilling its purpose of reconstituting the national home of the Jewish people based on the historical connection of the Jews to the Land of Israel (Palestine.)

The League of Nations Mandate for Palestine, unanimously approved by the world community, was allocated to the British by the League to oversee and facilitate Jewish immigration and development.  But to appease the Arabs, Britain, in violation of its Mandate, gave the land east of the Jordan River to the Hashemites. This land later became Jordan.

Then, in further violation of their Mandate, the British blocked Jewish immigration – even to those fleeing the Holocaust who had nowhere else to run.  In contrast, they turned a blind eye to illegal Arab immigrants who flooded into Palestine after Jewish resettlement drained the swamps, restored the barren lands, and improved living standards. Arabs living in Israel and those who claim to be refugees are, for the most part, the descendants of these illegal immigrants.

For decades, the legal and historical rights of the Jewish people to the State of Israel were ignored or challenged. The prevailing narrative maintains the lie of the Israeli occupation as its centrepiece.  After all, to quote Mark Vandermaas, founder of Israel Truth Week, “Owners can’t be occupiers.”

There is a shocking lack of awareness and knowledge of Israel’s inarguable rights under international law, even in Israel.  Over the years, Israelis didn’t pay enough attention to the emerging anti-Israel narrative. The Arabs took advantage of this vacuum and mounted a massive propaganda campaign fueled with false data, distorted versions of history, and out and out lies.

“The deafening silence on this topic [Israel’s sovereignty] is what has allowed the BDS movement to thrive; it is the very lifeblood of the charge of Israeli occupation,” writes Naomi Kahn of the organization Regavim. “The message of Israel’s legal rights must be at the centre of public discourse.”

Regavim prevents the “illegal seizure of state land and protects the rule of law and clean government in matters of land-use policy in the State of Israel.”

Canadians for Israel’s Legal Rights (CILR) stepped in to fill this void. “Twelve years ago, in 2009, when we started, nobody in the world was talking about Israel’s Rights. Today there is much talk but little action,” says Goldi Steiner, who founded CILR together with the late Salomon Benzimra.

Since its founding, no other nation in the world has had its very existence disputed.  Nor did any other country undergo international censure and economic reprisals, as did Israel. Not Tibet that China overtook, nor Azerbaijan in the disputed Armenian territory of Nagorno-Karabakh, nor Russia when it annexed Abkhazia and South Ossetia in Georgia and Crimea in Ukraine.

“Legal objections [against these countries] are not raised consistently,” says Law Professor Eugene Kontorovich. Israel’s treatment in the international arena is exceptional; it is political and motivated by hostility to the Jewish State.”

“Education is more important today than ever,” Steiner adds.  “Students are being indoctrinated, not educated, by anti- Zionists.”

To counter this misinformation, CILR distributed thousands of Mr. Benzimra’s exceptionally comprehensive book, The Jewish People’s Rights to the Land of Israel. Originally published in Hebrew, CILR disseminated it to thousands of university students in Israel.

MK Danny Danon, Israel’s former Permanent Representative to the United Nations, is enthusiastic about these long-overdue efforts to educate the public regarding the San Remo Resolution.

“We want to put It on the table and make it public knowledge,” he stated. “Israel’s rights are being challenged by Arab myths embraced by the world.”

At Goldi Steiner’s initiative, the idea of celebrating an annual Yom San Remo commemoration was brought to the Knesset by MK Uzi Dayan for consideration.  It is already out there in the form of a bill to be reviewed and voted on.

Furthermore, a stellar international group of panelists will participate in a Zoom webinar, organized by CILR, in partnership with Im Tirtzu and collaboration with the Zionist Organization of America-ZOA on Sunday, April 25, 10:00 -12:00 EDT; 17:00 – 19:00 Israel-time.

Participants include Mort Klein, President of the renowned Zionist Organization of America (ZOA); Avi Bell, Israeli Professor of Law at the University of San Diego and Bar Ilan University; and senior member of the Kohelet Policy Forum; Doug Altabef, Chairman of the Board of Im Tirtzu in Israel, and Eugene Kontorovich, Professor at George Mason University Scalia Law School, and the director of its Center for the Middle East and International Law, and Head of the Kohelet Policy Forum.

CILR’s Agnes Imani — Chief Administrative Officer — will host the program, titled, ‘Why is Educating About Israel’s Rights To The Land More important Now Than Ever.’  Its Co-Chairs Goldi Steiner, Irving Weisdorf, Doug Altabef, Chairman of the Board of Im Tirtzu: Matan Peleg CEO, and Tami Baran will moderate.  The Canadian Institute for Jewish Research (CIJR) is one of the webinar’s many sponsors.