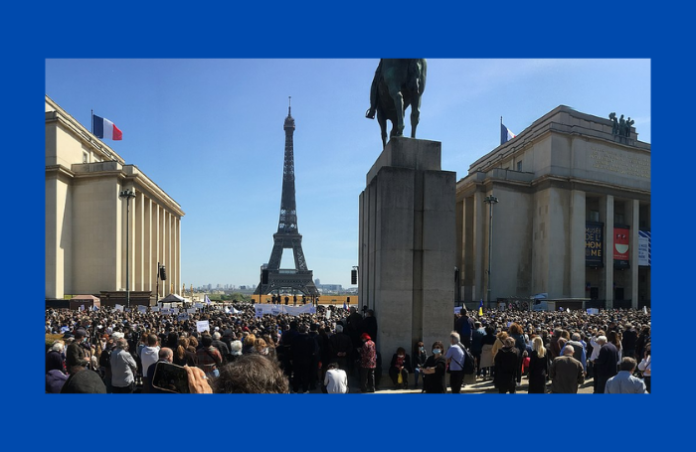 Stop justifying the 45 deaths on Mount Meron – opinion:  Shmuley Boteach, Jerusalem Post, May 3, 2021 — My daughter called me before the Sabbath in terrible pain. Beyond trying to process the deaths of religious Jews at Mount Meron on Lag Ba’omer, she was in an argument on a chat group with a woman who said that the deaths had a reason.

What the Sarah Halimi Case And Current Protests Mean For French Jewry:  Cnaan Liphshiz, Times of Israel, May 3, 2021

But while French courts acknowledged that the crime was antisemitic, two 2019 lower-court determinations held that Traore could not be tried for murder because he was psychotic at the time of the killing”

The 2017 murder of a Jewish woman in France has again burst into global view, with protests held in several countries last week against a legal ruling that means her killer will not face a trial for murder.

But who is Sarah Halimi? Why is her death becoming a cause celebre for Jews around the world? And what, if anything, are the protests aimed at changing for Jews in France?

“The hour is grave. France is in peril. She is threatened by several mortal dangers.”

A group of retired generals has warned in an open letter that France is sliding toward a civil war due to the government’s failure to control mass migration and creeping Islamism in the country. The letter, which has broad public support, according to polls, also warns against cultural Marxism, runaway multiculturalism and the expansion of no-go zones in France.

The warning comes amid a wave of jihadist attacks — including the beheading of a schoolteacher — committed by young men, none of whom were previously known to French intelligence services. The letter also comes after widespread public indignation over a French justice system compromised by political correctness — as evidenced by the refusal to prosecute an African immigrant from Mali who, while shouting “Allahu Akbar” (“Allah is the Greatest”), killed an elderly Jewish woman by breaking into her home and pushing her off her balcony.

Building a Mosque in France, Never Easy, May Get Even Harder: Norimitsu Onishi and Constant Méheut, NYTimes, Mar. 31, 2021

“Muslim communities find the decks stacked against them.”

As the temperature hovered around freezing, hundreds of men trickled into a former slaughterhouse on a recent Friday. In the overflow crowd outside, scores more unfurled their prayer mats on the asphalt as the imam’s voice intoned through loudspeakers.

The old slaughterhouse has served as a temporary mosque for the past 21 years for many Muslims in Angers, a city in western France. Construction on a permanent home has stalled since last fall when the City Council unanimously rejected a proposal by Muslim leaders to hand ownership of their unfinished mosque to the government of Morocco in return for its completion. Local members, after donating more than $2.8 million, were tapped out.

“Even dead Jews were not allowed to rest in peace,” said Bauer, noting that Jewish cemeteries were frequent targets for graffiti and vandalism with headstones overturned.”

Nearly a dozen European countries are “insufficient” in their efforts to meet the challenges of anti-Semitism, a report by the United States Commission on International Religious Freedom found.

“Sadly, 2020 was another difficult year for global anti-Semitism” between COVID-19 unleashing an “avalanche” of anti-Semitic propaganda to physical attacks on Jews worldwide, said Gary Bauer, a commissioner with the organization, as well as president of the American Values think tank.

Sarah Halimi: How killer on Drugs Escaped French Trial For Anti-Semitic Murder:  Hugh Schofield, BBC News, May 2, 2021 — Can an anti-Semitic killer be declared insane because his mind was affected by regular consumption of cannabis? That is the question at the heart of an explosive legal row in France following the decision not to prosecute the man who killed Sarah Halimi.

Will *France* Save Western Civilization?:  Steven Hayward, Powerline, Apr. 29, 2021 — Back in February we took prominent notice of how French President Macron and a number of other leading French officials decried the poisonous ideas emanating from American universities, which has led me to wonder why there aren’t at least ten Republican governors taking the same line. (So far the only one who has, and only to a limited extent, is Florida’s De Santis.)

European Parliament Becomes First Legislature to Censure UNRWA Over Antisemitic Hatred Taught in Palestinian Schools:  Algemeiner, Apr. 28, 2021 — The European Parliament on Wednesday passed a resolution expressing concern at the “hate speech and violence” taught in Palestinian schools run by the United Nations Relief and Works Agency (UNRWA) — the UN refugee agency dedicated exclusively to the descendants of the original Palestinian refugees from Israel’s 1947-48 War of Independence.

France Joins UK in Seeking Tighter Security Measures on Released Terrorists:  Patrick Dunleavy, IPT News, May 3, 2021 — In light of recent Islamic terror attacks, French Interior Minister Gérald Darmanin is calling for stringent security measures to be placed on convicted terrorists being released from prison. If passed into law, a released terrorist could have his movement limited, including where he can live or what public events – such as concerts or sporting events – he would be barred from attending.

isranet org
Previous articleFrance: Generals Warn of Civil War Due to Creeping Islamism
Next articleDaily Briefing: WEDNESDAY’S “NEWS OF THE WEEK IN REVIEW” -(May 6, 2021)

isranet org - April 15, 2021 0
By Joel Goldenberg The Suburban May 17, 2017 On one hand, Canadians and North Americans as a whole are frequently told that there's a greater...