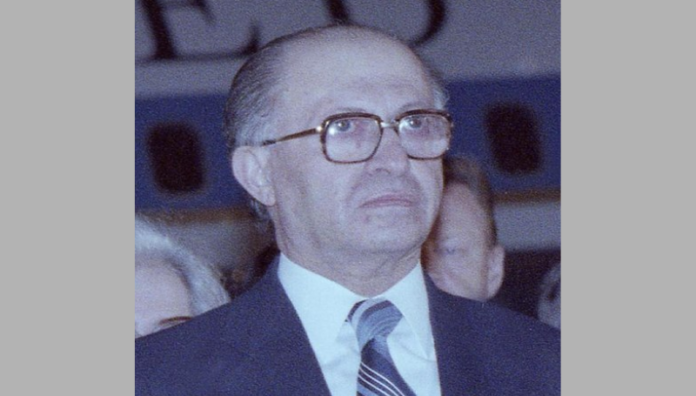 Before World War II, Brisk (a/k/a Brest or Brest-Litovsk), a city of 300,000 in what is now Belarus, had been for centuries one of the most vibrant centers of Jewish life in the world, known especially for its rabbis and scholars, and, by the early 20th century, also for being an important hub of Zionist politics and activism. All this activity ended swiftly with the war, when the city was one of the first to fall to the Third Reich during its 1941 invasion of the Soviet Union. The Nazis not only put an end to Jewish activity in Brisk, they sought to erase the Jews themselves. Over the course of a few days in October 1942, most of the remaining Jews of Brisk—nearly 20,000 in number—were murdered by the Nazis and their accomplices.

Thirty years later, in 1972, an association of former residents of Brisk by then living in Israel held a commemorative event for the martyred Jews of their home. The keynote address was given by the then-leader of Israel’s political opposition, Menachem Begin, who would five years later become the country’s prime minister.

Born in Brisk in 1913, Begin had lost both of his parents and a brother in the Holocaust. His speech pays tribute to and commemorates not only family and friends, but the community as a whole. Through extensive personal recollection and poetic imagery, Begin evokes a lost world not only of Brisk but of prewar East European Jewry more generally.

No English translation can do justice to the speech, which is rich with references that would have been easily understood by his audience but are more obscure to the contemporary Israeli or American reader. First and foremost Begin invokes the Jewish religious tradition. Not only are there overt citations of Jeremiah and the Yom Kippur liturgy, but also more subtle allusions, like the phrase “strike them with a mighty blow,” borrowed loosely from Judges 15:8.

Present too is modern Jewish literature, including the work of the poet and novelist Zalman Shneour (1886–1959), who wrote in both Hebrew and Yiddish, and Ahad Ha’am (1856–1927), the theorist of cultural Zionism.

Begin also conveys the texture of his hometown’s history, relating a famous legend that the Padua-born rabbi and communal leader Saul Wahl Katzenellenbogen (1514–1617) was made king of Poland for a day.

Then he weaves together the city’s disparate and often competing strands of Zionist activism, mentioning fondly the secular Zionist Tarbut school, its religious-Zionist counterpart Taḥk’moni, and the socialist-Zionist youth group Ha-Shomer Ha-Tsa’ir (the Young Watchman). The last of these Begin had belonged to early in his life, before embracing its right-wing competitor Beitar; at the time of his speech former members of Ha-Shomer Ha-Tsa’ir dominated the political and military elite, and included Begin’s bitterest political enemies.

In this way the speech is deeply political and points toward many of the central themes that typified Begin’s life and politics. These themes include: a) reverence for the Jewish past and for the rituals, beliefs, and world of Judaism, b) the unity of the Jewish people above and beyond partisan divisions, and c) the Zionist idea that only by rediscovering a form of inner courage could Jews begin to defend themselves and their way of life. These themes come together through the invocation—adapted from the great Hebrew writer S.Y. Agnon’s speech at the 1966 Nobel banquet—of the city and metaphor of Jerusalem. It is therefore fitting that we present this translation on the occasion of Yom Yerushalayim—the anniversary of the liberation of Israel’s capital from Jordanian occupation.

A copy of the Hebrew version of the speech—virtually unknown until its significance was uncovered by my colleague Meir Soloveichik —is preserved in the Menachem Begin Center archives. Yet it deserves the attention of English-language readers as well. I am thus pleased to present the first English-language translation of this remarkable oration.

David Wolpe NYTimes, Sept. 12, 2021 A friend of mine was publicly canceled. He deserved it and he knew it. He spent a year working with...
Read more
Analysis

The Secret Transcripts of the Yom Kippur War