The Democratic Party’s Anti-Israel Match Made in Heaven 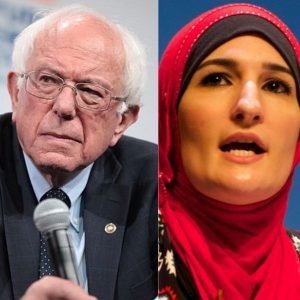 Strange things happen every day, so often that one can easily become indifferent when reading an outrageous and bizarre headline. Still, when Linda Sarsour, the infamous Palestinian-American political activist, announced that she would be Bernie Sanders’ campaign surrogate, many an eyebrow must have risen. Indeed, this close alliance between a Jewish presidential candidate and a virulent opponent of Israel and possible anti-Semite seems odd at first sight. After all, Sarsour supports BDS and openly associates with leading anti-Semites of the US, like Nation of Islam’s Louis Farrakhan, who compared Jews to termites. In a 2015 speech, she equated Zionists with white supremacists. The Women’s Marches she organized in 2017 were poisoned by an extremely hostile atmosphere for Jewish activists, leaving them marginalized. She also has close ties with the Council on American-Islamic Relationships (CAIR), an organization criticized for having an Islamist agenda and being affiliated with the Muslim Brotherhood and Hamas. Someone with a track record like this one should not be involved in US presidential politics. Still, along with the “Squad”, which includes congresswomen Omar, Ocasio-Cortez, Tlaib and Pressley, she is helping redirect the Democratic Party away from its traditional support for Israel towards a party that supports BDS and tolerates antisemitism.

Why on earth then would Sarsour feel “proud” to elect the first Jewish American president, as she stated on Twitter? And why would Sanders, a Jewish candidate, want to associate with perhaps the most obvious anti-Israel figure in the country? The answer to the second question is quite simple: by a burning desire to appear progressive, humanitarian, or simply to feel integrated within the Democratic Party, Sanders is becoming more tolerant of vehemently anti-Israel sentiment, which only ends up hurting Jewish lives and the State of Israel. Just like the rest of his party, he refused to firmly condemn antisemitic remarks made by Ilhan Omar, stating only that “Ilhan has got to do, maybe, a better job in speaking to the Jewish community”. A Jew criticizing Israel’s policies is entirely acceptable, which is why Israel’s many political parties are relentlessly campaigning to promote their own vision of the country. His stance on Israel seems to be middle-of-the ground, as he regularly affirms that “U.S. foreign policy should be even-handed. That’s all — even-handed…. We respect Israel. Israel has every right to live in peace and security, but so do the Palestinian people” (Times of Israel, August 14, 2019). However, there is nothing noble, progressive or “woke” by siding with the BDS movement obsessed with Israel’s destruction and whose members regularly express antisemitic opinions, especially with an activist closely connected to more radical Islamist causes. At the 2016 American Muslims for Palestine conference, she stated outright that her movement disavows all Jews who don’t share her anti-Israel positions.

Sarsour’s backing of Sanders, on the other hand, does not seem so puzzling. After all, her foray into US presidential politics is only motivated by her extreme anti-Israel stance, and possibly even CAIR’s own agenda. She has no love for the United States. She simply sided with the candidate that would be the most lenient with her own views, who in this case happened to be Jewish. Using this coincidence, she found a way to appear benevolent and open-minded to young voters, while working only at taking care of her own interests. If one wanted to inflict as much damage as possible on Israel and American Jews, the most efficient way would be to go through a presidential candidate, even a top Democrat, while further radicalizing him in the process. Her disguise of supposedly being proud to elect the first Jewish American president is not fooling anyone.