Where Are the Fans for Israel’s National Baseball Team? In New York. 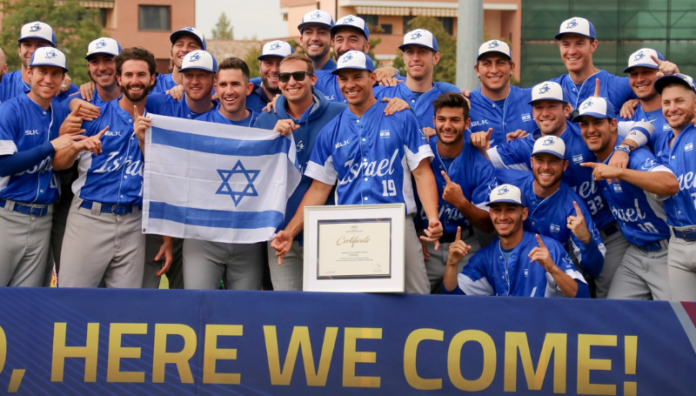 Shortly before the start of a recent exhibition game, the members of Israel’s national baseball team assembled along the third base line at Maimonides Park in Coney Island and replaced their baseball caps with yarmulkes in preparation for the singing of the Israeli national anthem. 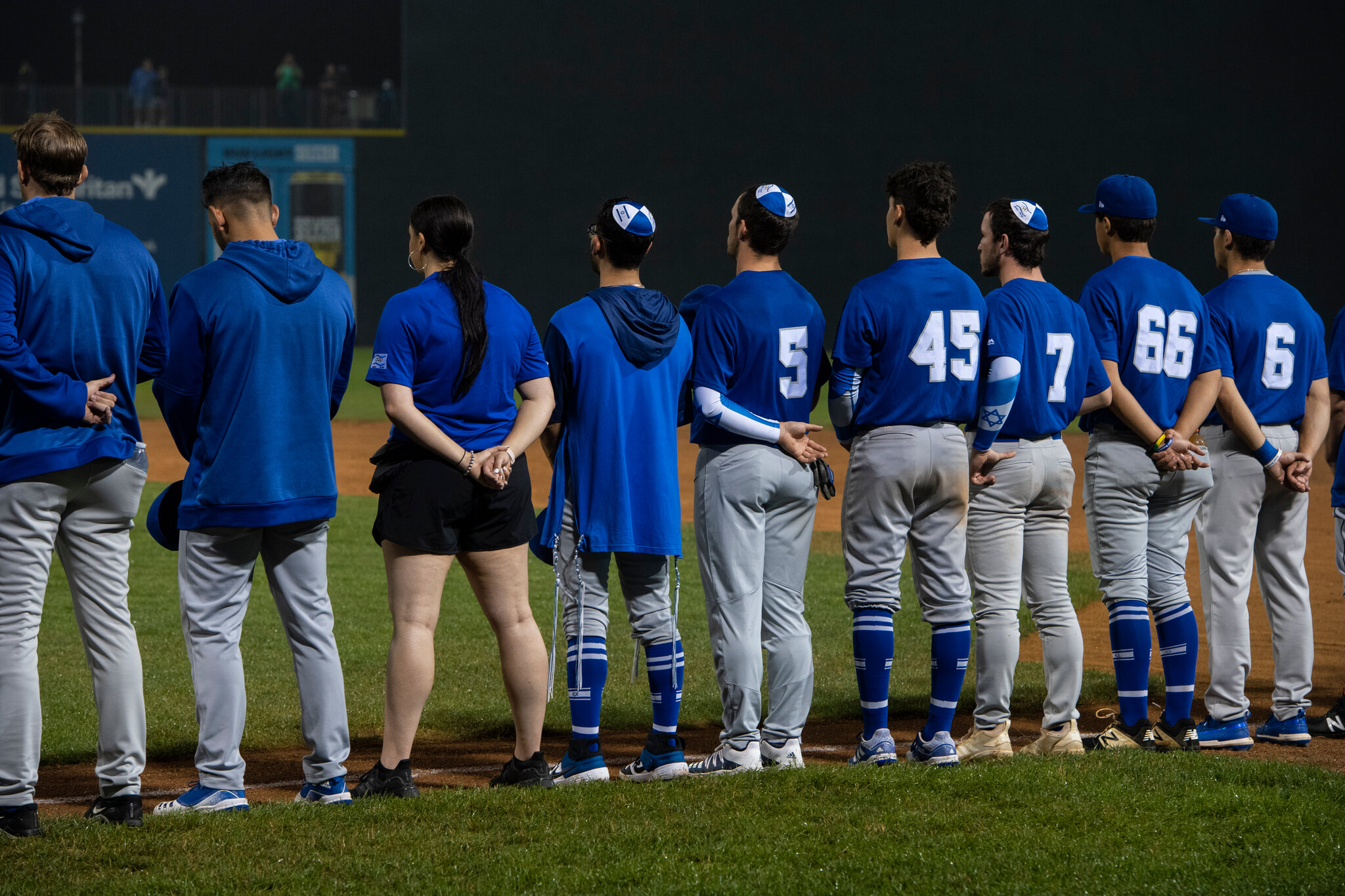 But only a few players knew enough Hebrew to sing along.

The team, currently on tour in New York, only has four players native to the country. The rest of the 24-player roster mostly consists of American players whose Jewish roots allow them under Olympic rules to play for the team.

It’s a ragtag assemblage of retired major leaguers, current minor leaguers and even some weekend warriors with day jobs: The team’s veteran pitcher works in Manhattan as head of programming for City Winery, a wine, food and music space. Another pitcher is an investment analyst with Goldman Sachs. An exporter of bathroom fixtures is the team’s general manager.

Currently in the middle of a warm-up tour in the New York area, Team Israel will compete in Tokyo against five other qualifying countries: the U.S., Japan, the Dominican Republic, Korea and Mexico.

“We joke that we’re a combination of the Bad News Bears and the Jamaican Bobsledding Team,” said the team’s trainer, Barry Weinberg, whose illustrious major league career included stints as a trainer for the New York Yankees, the Oakland A’s and the St. Louis Cardinals. He has earned seven World Series rings and has massaged aching joints for the likes of Thurman Munson and Reggie Jackson. At Maimonides Park on July 11, some fans waved Israeli flags. Others wore hats and shirts bearing the Star of David. One fan wore a T-shirt of a rabbi slugging a baseball that included the words “Jew Crew,” a reference to the national team, which was wearing crisp blue uniforms also featuring the Star of David.

Team Israel gave the crowd a show, beating the Bravest, the club team of New York City’s Fire Department, 12 to 3.

The squad likely has more fans in New York than in Israel, said Peter Kurz, the fixture exporter who is the team’s general manager.

Perhaps 1,000 people play organized baseball in Israel, since official ball fields are scarce there, Mr. Kurz said, and the last Israel team to qualify for the Olympics “in a team sport using a ball” was the men’s soccer team in 1976.

Under Olympic rules, players can qualify to be on the team if they travel to Israel and obtain citizenship, which the country grants to anyone with at least one Jewish parent, grandparent, or spouse.

For many players, being on the team has connected or reconnected them to their Jewish identities. “We got a chemistry, a brotherhood, that no other team has, that tribe feeling,” said pitcher Matt Soren, 30, who has a wicked slider.

He grew up idolizing baseball’s short but illustrious list of great Jewish players, from Sandy Koufax and Hank Greenberg to more modern stars like Shawn Green. They offered hope that he too could play professionally.

Mr. Soren, who lives in Astoria and coaches youth baseball teams on Long Island, was drafted by the Philadelphia Phillies in 2013 and pitched professionally for five seasons, including stints with the independent league Long Island Ducks and the New Jersey Jackals. He said he was often the only Jewish player.

“We want to win not just for ourselves, but so that little kids in Israel can see it and know that they can make it too,” Mr. Soren said. 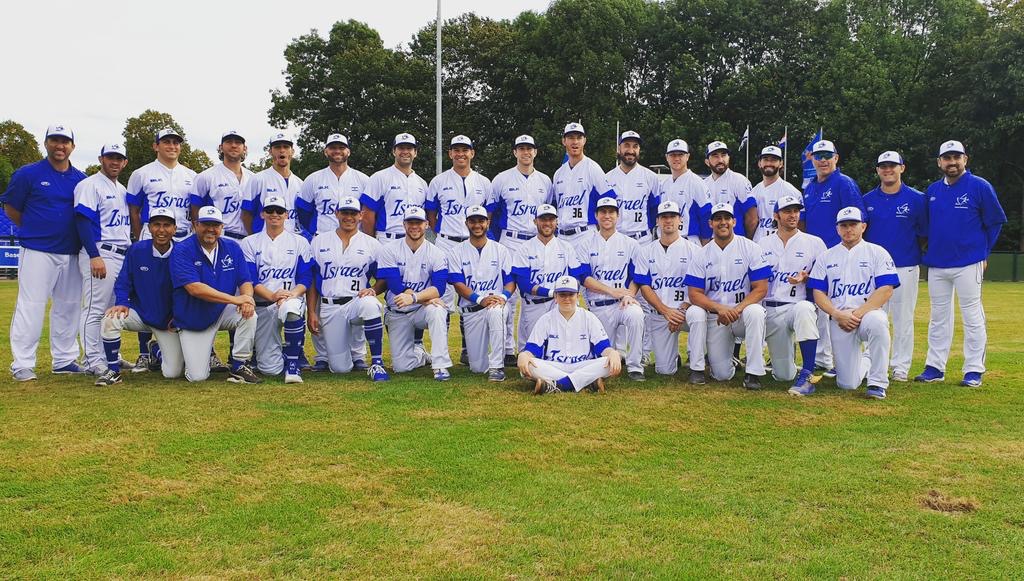 Team Israel was formed in the 1990s but rarely had much success until recently. One challenge was finding the best available Jewish players, even those whose Jewish heritage was not so obvious, like Ty Kelly and Danny Valencia, both former Major Leaguers on the Olympic team whose mothers are Jewish.

“It’s not difficult to find the Cohens and the Levys, but try finding a Ty Kelly,” said Mr. Kurz, who has been obsessively beating baseball’s bushes for Jewish players.

Over the past decade the team has gotten 18 American players to fly to Israel to make aliya, the Hebrew term for homecoming which results in getting citizenship.

In 2017, the team gained use of a private jet owned by the casino magnate Sheldon Adelson to fly a group of players to Israel for their citizenship, including former major leaguers Ike Davis, Ryan Lavarnway and Jon Moscot.

That was the same year the team first made a mark on the baseball world by finishing sixth in the World Baseball Classic. They traveled with their “Mensch on the Bench” mascot, a life-size dummy of a Hasidic man who had its own locker and spot in the dugout and received ceremonial offerings like Manischewitz and gefilte fish. (The mascot has since been retired in hopes to cultivate a more modern image.)

The team’s current star is Ian Kinsler, 39, second baseman and a four-time All-Star. He announced his retirement from the majors in early 2020 and quickly gained his citizenship that March, just before Israel locked down to stem the spread of coronavirus. Mr. Kurz said he has spoken to the father of Jacob Steinmetz, 17, a Long Island pitcher who recently became possibly the first Orthodox Jewish player selected in the major league draft, about his son joining the team.

Major league players currently cannot play for the team even if they qualified, since the Olympics fall during their season. Most minor and independent league players, by contrast, can take a hiatus to play in the Olympics.

One of them, D.J. Sharabi, 29, a member of Team Israel who currently pitches for the Sioux Falls Canaries, a minor league team in South Dakota, is a devoutly observant Jew who says daily morning prayers wearing a prayer shawl and keeps kosher despite the difficulty of finding kosher restaurants.

Mr. Kurz and his team of unofficial scouts depend on word of mouth and scour drafts and rosters for Jewish-sounding names to recruit players.

In the case of Mr. Kelly, he was signing autographs after a minor league game and mentioned to some young fans wearing yarmulkes about his Jewish heritage. The boys’ father happened to know Mr. Kurz and called him.

Mr. Kurz heard about the Jewish identity of another player, Scotty Burcham, a 28-year-old shortstop, when one of the team’s scouts saw on the player’s mother’s Facebook page that she might be Jewish.

Mr. Kurz had been told that Mr. Valencia, 36, had a Jewish mother. His father is Cuban and had converted to Judaism.

Scott Barancik, a journalist who runs Jewish Baseball News, a website that maintains a list of Jewish ballplayers and publishes a feature called “Not a Jew” to eliminate confusion caused by the Jewish-sounding names of non-Jews, was able to find a public notice of Mr. Valencia’s bar mitzvah in an online newspaper.

Mr. Valencia, who had spent nine years in the major leagues before retiring in 2018, obtained his Israeli citizenship to play for Team Israel.

The players are now sharing rooms in a hotel in New Jersey, working out at a minor league stadium in Rockland County, north of New York City, and traveling by bus to games against college squads, local independent league teams and club teams.

The tour has the feel of an old-time barnstorming exhibition. But because of the current unrest between Israel and Palestine, security at the stadiums has been tight and armed Israeli security agents act as protection.

But inside Maimonides Park on July 11, the mood was festive. Mr. Soren took the mound in the seventh inning in front of his own cheering section: family and friends from his hometown, Roslyn, N.Y.

Nearby, Brandon Lakind and his friend Cameron Johnson, high school students from Randolph, N.J., said they had been following the team.

“It’s crazy to see that they made the top six teams in the world,” Brandon said. “That alone is pretty cool.”

One fan, Ed Schneider, 65, said he had attended 13 Olympic Games but is unable to go this summer because of a ban on spectators as a result of the pandemic.

“I’m here because I love an underdog and this is the closest I’m going to get to going to Tokyo,” said Mr. Schneider, a marketing supervisor from Long Island.

A onetime athlete, he said there was no way he’d make Team Israel.