The Secret Transcripts of the Yom Kippur War 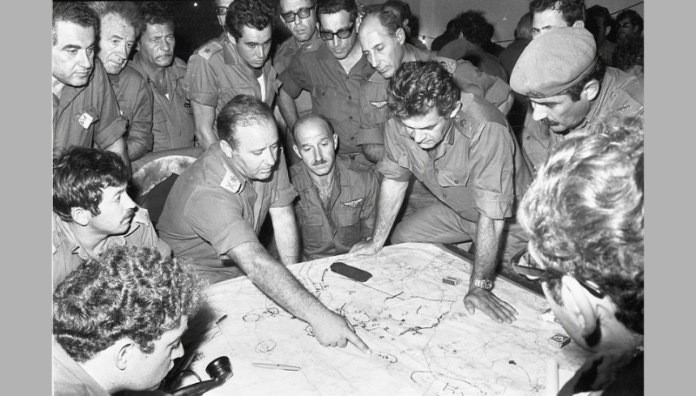 Forty-six years after the 1973 Yom Kippur War, dramatic transcripts from the first days of the war, including plans for a massive attack on major cities in Arab countries, have been declassified.

The documents, with many sections still redacted, were released for publication on Monday by the Defense Ministry’s IDF Archives. The declassified sections reveal details about plans for an attack that would be lethal and change the rules of the game.

In one section, then-IDF Chief of Staff Lt. Gen. David (Dado) Elazar tells then-Maj. Gen. Rehavam Zeevi, “I have two moves. The first is to destroy Syria. There will be an outcry from the world [redacted], but as a first step, let’s break one.”

Most of what Elazar said next is still redacted, but two words have been authorized for publication: “4 cities,” a hint at the targets of the attack.

Elazar said, “I want a dramatic turning point. I want someone to cry, ‘Gevald!’ Peoples are being wiped out, hold your fire, we’ll all cease fire. We’re in a catastrophe. If what I said is dramatic and stops the shooting – fine. It [will] stop Syria.”

Documentation of a different discussion reveals a bit more while still concealing much of what took place in those early chaotic days.

Then-deputy chief of staff Maj. Gen. Israel (Talik) Tal, discusses bombing Damascus: “I know that we haven’t agreed finally, it’s too serious and fateful a matter either way. I don’t accept the assumption about the effects that would break the enemy. That is to say, if I were 100% certain [redacted], I would say, ‘Let’s go.’ It’s possible this might not solve anything, and our situation would be a million times worse. I’m not sure that bombing Damascus will give us a ceasefire than not [bombing] Damascus.”

In the same meeting, Tal suggests that Israel retreat from part of the Sinai Desert to concentrate its efforts on the northern front and in battles to check Syria.

“My operative proposal is to hold the Golan Heights steady with the ground forces and use the air force to help thwart [the Syrians]. Not desperate assistance, well-considered assistance in bad circumstances. In Egypt we need to fight wisely to hold them off,” he says.

“I’m not saying it’s impossible there, and [we could] use the air force to destroy tanks in those areas so that we could have a lot of forces here. We aren’t using armor properly here, because we’re doing things under pressure,” Tal says.

One of the better-known quotes from the Yom Kippur War was uttered by then-Defense Minister Moshe Dayan, who voiced concern about the possible “destruction of the Third Temple [meaning the state of Israel].” The newly-declassified transcripts show just how pessimistic Dayan was.

On Oct. 7, 1973, 24 hours after the war broke out, Dayan is recorded saying, “What am I afraid of more than anything, in my heart? That the state of Israel will eventually be left without enough weapons to defend itself. It doesn’t matter where the line is, there won’t be enough tanks or planes and not enough people or well-enough trained people to defend the Land of Israel. In the end, no one will fight this war for us, and all the Arabs will swoop down on us from all sides. I want to tell that to Golda [Meir].”

That same day, the generals spoke among themselves. “At [the airport] Sde Dov, Moshe was talking to me about losing the Third Temple. He was very hoarse, it was painful to hear him. He was talking about a battle for the Land of Israel,” Zeevi says.

Elazar replies that Dayan was in no way exaggerating: “This, friends, this is truly a battle for the Land of Israel.”

Zeevi goes on to say that he believes that the southern Golan Heights had already fallen: “Maybe I’m being subjective because he [Dan Lener, a division commander] … told me this morning that the fighting in the southern Golan was over, and we lost.”

In yet another discussion, Dayan does not keep the seriousness of the situation a secret.

“Anyone who still hasn’t gotten a shock will get it now. We’re at the number of tanks we had in the [1967] Six-Day War. This Hermon cost us 70 men once and 30 casualties and 70 wounded a second time, and that will destroy the people’s morale … This is terrible, we need to make sure they’re out of there and attack, and whoever is killed is killed…”

‘If Jordan comes in, we’re lost’

The senior commanders spend much time discussing what tactics can be employed to stop the advancing Syrians and Egyptians.

“Our situation is bad, very bad,” Elazar says in a talk with his deputy. “I’ve said repeatedly [about] Moshe [Dayan’s] option of starting to fold and withdraw – we can always do that. My plan is to try and break [them], at one point and possibly two. That might work, or it might not.”

“Jordan is just about to come in. If we [redacted] Damascus, who knows what will happen if Jordan joins [the war]. If Jordan does, then we’re lost. That’s Jerusalem, 30 km, 400 tanks. Then the air force in Amman, another push by the air force [redacted] … In Damascus economic targets go immediately, and if the air force goes to those divisions we’ll see what happens,” the chief of staff says.

Elazar orders then-GOC Northern Command Yitzhak Hofi: “You don’t move from the ceasefire line. What will be will be, and I don’t intend for us to retreat from there. We won’t retreat. I’m coming up with a proposal to do all sorts of things in Syria that you were talking about yesterday because we’re approaching a situation in which we must break Syria soon. I want Syria to want a ceasefire today.”

‘Call up children and the elderly’

On Oct. 9, two days into the fighting in the Gaza Strip, the General Staff already knew how grim things were. Dayan had made it clear to the generals that the Golan Heights must be defended “to the last man.”

“If we need to switch the GOC to do that, we need to decide whether we will or not. This needs to be an order. We will bring in the armored forces, but we’ll do so to finish off the Syrians’ tanks. No matter what, there will be no retreat from that line. Not a single centimeter,” Dayan says.

Dayan also makes unprecedented proposals to meet the lack of manpower caused by the many casualties and injured. “We need to look into the possibility of conscripting all those we release when the young people and reserves were enlisted – bring them into the tanks, the air, whatever is needed. We’ll get tanks, and there won’t be people. Take the older people we’ve released, and take the younger ones who haven’t enlisted, from age 17. We need to … look into the feasibility of enlisting Jews from all over the world – Americans, British, South Africans, anyone who wants to. And if any of them have [military] professions – pilots, tank drivers.”

Dayan has harsh criticism for the government and then-Prime Minister Golda Meir and suggests alternatives that she had not approved.

“The government has a different approach and a different spirit. I will have an obligation to you, to ourselves, to the army and to the people to say what I think needs to be done and we haven’t done…. When I told Golda she was in shock – first, they don’t know the facts, and second, some of them don’t understand the facts and the military interpretation of the situation,” he says.

The senior commanders were dealing not only with immense difficulties on the battlefield, but with the need to keep the homefront from collapse. At one point, Elazar talks with the commander of the IDF Manpower Division Maj. Gen. Herzl Shafir how best to deal with the hundreds of casualties who had been given hasty battlefield burials, and that some of them were unidentified.

“I’m not telling the families of the casualties until Sunday … after that, we need to consider it,” Shafir tells Elazar.

“We need to understand that we are burying everyone in temporary graves. There are no funerals. The problem we will face is how to tell the families. They’ll want to come see the cemeteries, and we can arrange that,” Shafir points out.

Elazar answers: “If we don’t notify [them], we’ll be invaded by mothers. They’ll start walking around and looking at signs for names. Before you do anything, post a guard so they won’t get in there.”

A conversation between Elazar, Tal, and then-IDF Spokesman Col. Pinchas Lahav deals with how to present the difficult situation in the north and the south, especially given the plans to bomb Damascus.

Lahav says, “We wanted a scare reaction and to create a picture … we can hold off on that.”

Tal responds: “Clear skies … and Arabs screaming as Damascus is bombed. It’s no good for getting us Phantoms [referring to the air convoy from the US to Israel in which aircraft and weapons were being transferred].”

Lahav suggests framing what was taking place to avoid dramatic headlines: “Not lie about the facts, but we can lie in technique.”

Elazar then asks Lahav if he had been too optimistic a day prior to the discussion, and Lahav answers in the affirmative: “Yes, I told you to be optimistic, because I think that if we make it out of this, the people of Israel will forgive you. The spokesman is a weapon. The defense minister, with all due respect, is rigid in his thinking.”

Lahav was to be mistaken – after the war, Elazar was the target of extensive criticism for his handling of it as chief of staff.

Some of the transcripts deal with the internecine battles between the generals themselves. Elazar attacks how then-Mag. Gen. Ariel Sharon [who would go on to become prime minister] was handing the southern front, saying his tactics approached the level of a “war crime.”

“I didn’t say anything … as an order and today he, against orders, went all the way to the water, fought a major battle against orders, lied to [GOC Southern Command Shmuel] Gorodish [Gonen], and when I listen to him on the radio, I see he’s lying to me. And now he wants permission to cross to the other side.”

In still another conversation, one of the most sensitive of the war, Elazar informs Gorodish that he is to be replaced by former Chief of Staff Haim Bar-Lev.

“Worse solutions for you could have been found. This is a test of how much you trust me, that I’m trying to find a solution that is least harmful to you. You will remain GOC Southern Command, and Haim Bar-Lev will come down and be at your side. If you accept it with good grace, it will be an excellent solution,” Elazar encourages him.

“You need to take it well, Shmulik. When we’re down or when the war is over, you’ll understand. There are [different] dimensions to this war. Shmulik, I want you to accept it. Trust me, that I’m doing my best for everyone in the circumstances. Take it in good spirit, but he is the commander and you’ll work with him as such.”