The Liberal Party’s “Too Big” Tent 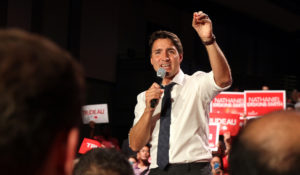 The autumn election season is upon us.  In many of these elections, voters face a choice between making a sharp turn to the right or left.  In the Americas, seven nations are scheduled to decide whose turn it is to lead the country; in Europe, eight.  Israel is re-running its last vote because the splits within the electorate, prevented the formation of a stable coalition.  Great Britain is on the cusp, as Conservative Prime Minister Johnson tries to trigger a vote to circumvent obstacles to Brexit.

In the Canadian Federal Election voters will choose to elect one of two centrist parties; the Conservatives, who are right in the middle of the political spectrum, and the Liberal Party, which despite its name has been creeping further to the left.

An election concern of Canadian Jews is the breadth of the tent of the governing Liberal Party.  In the twenty-first century, people of different ethnicities are expected to be represented in Parliament.  Also, to be expected, among them, they hold many different views, promote disparate ideologies.  What’s shocking is that the Liberal Party accepted a candidate, whose creed included a whole slew of anti-Semitic tropes, including the claim that Jews use children’s blood for baking matza. Imam Hassan Guillet is openly anti-Semitic.  He vilifies Israel and condones anti-Israel terrorists, contradicting long-standing Liberal policy.

The Liberal Party reacted when B’nai Brith uncovered and publicized Guillet’s racism, quickly rescinding his candidacy.  One Jewish Liberal parliamentarian commented, “…every party has to remove some candidates during the election process; no doubt this will be one of them.”  As soon as the Liberals discovered the problem, they dealt with it.

Or so it seemed.  Guillet claims that the Liberal Party knew about his anti-Semitic remarks and had worked with him to create an action plan to counter any trouble his comments might create.  The problem for the Liberals wasn’t that their candidate was an anti-Semite; the problem was that he got ‘found out’ before they could cover it up adequately. The initial acceptance of Guillet’s Liberal candidacy says that the Liberal’s big tent welcomes anti-Semitism.

It will only get worse.  Guillet claims that Saint-Léonard—Saint-Michel, the riding he wants to represent, is no longer a primarily Italian enclave.  Muslims make up a significant component of the population, and they can be expected to support someone who shares their values.  Ayaan Hirsi Ali, the Somali critic of Islam, says that Muslim anti-Semitism is of a “scale and scope” that most people in the West do not understand and is, therefore, all the more insidious.  Guillet’s anti-Semitism is not a problem for people who share anti-Semitic values.  As Canada admits more people with those values, our political landscape will shift.  The Canadian Government has denied a report in the Lebanese newspaper Al Akhbar that it recently agreed to accept one hundred thousand Palestinian refugees from Syria and Lebanon.  How many has Canada decided to take in?

Future Guillets will not have to prepare action plans to cover-up their hatred towards Jews and Israel.