On the UNC College Campus, Antisemitism Marches On 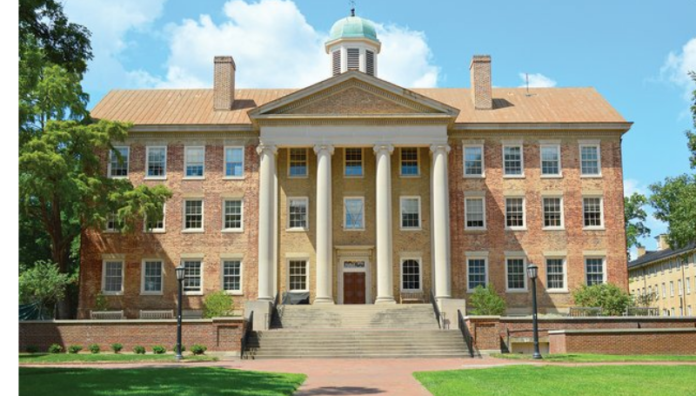 “Cravey promoted and antisemitic initiative on social media asking the public to boycott “Jewish Products made in Israel or made outside of Israel that directly or indirectly support Israel.” Imagine the outcry if a UNC professor encouraged boycotting “Muslim Products.”

As I previously reported, graduate student Kylie Broderick is currently teaching “The Conflict Over Israel/Palestine” at the University of North Carolina at Chapel Hill (UNC) – despite her history of attacking Israel and recently promoting the view that Israel should not exist.

According to her syllabus, Broderick also scheduled a quiz on Yom Kippur, the holiest day of the Jewish year. Shouldn’t the instructor teaching about Israel know better?

Earlier this year, Broderick signed an “Open Letter and Call to Action” affirming her commitment to promote the Boycott, Divestment, and Sanctions (BDS) movement against Israel “in the classroom.” Her advisor, Cemil Aydin, also signed and promoted the letter on social media.

In fact, 27 UNC “scholars” signed the letter, using their UNC credentials from departments of History, Religious Studies, English, Art, Musicology, and others.

The ADL explains: “Many of the founding goals of the BDS movement, including denying the Jewish people the universal right of self-determination — along with many of the strategies employed in BDS campaigns, are anti-Semitic.”

Another signatory to the letter is Elyse Crystall from UNC’s English and Comparative Literature Department. In 2018, Crystall shocked the Jewish community when she wrote an antisemitic email opposing a candidate for city council because the candidate attends a local synagogue.

UNC geography professor Altha Cravey, another signatory, taught many courses at UNC and is still listed as an active professor, though she recently retired. Cravey promoted an antisemitic initiative on social medial asking the public to boycott “Jewish Products made in Israel or made outside of Israel that directly or indirectly support Israel.”

Cravey also felt the need to tweet, “Apparently a Jewish person can learn to speak a hateful slur as fluently as others.”

Prominent UNC faculty members in two of the departments offering Broderick’s course signed a “Statement on Palestine from North Carolina Academics,” stating, “We acknowledge our complicity in Israel’s oppression of the Palestinians…[and we] reject the prevalent ‘two-sides’ narrative.”

A number of the signatories — either directly or indirectly — are Broderick’s supervisors or mentors. One is Morgan Pitelka, a member of the History Department, who heads UNC’s Asian and Middle Eastern Studies program. Three department officers also signed: Department Chair Lisa Lindsay; Diversity Liaison/Director of Equity and Inclusion Miguel La Serna; and Director of Graduate Studies Sarah Shields, who is a BDS activist. She taught the Israel/Palestine course up until this year, and is now supervising Broderick’s course.

Even if Kylie Broderick relents on her promise to use her UNC classroom to endorse BDS, her recent public comments — such as tweeting “Zionist dirtbags” and demanding “Everyone at UNC…Boycott Israeli products” — have already stopped some Jewish students from enrolling in the class and contributed to an anti-Jewish and anti-Israel atmosphere on campus.

A 2020 UNC graduate told me about enrolling in and attending Shields’ course, “The Modern Middle East.” The student reported that Shields spent the first 30 minutes of the first class attacking Israel with a photo presentation showing “the worst pictures she [Shields] could find of Israel.” The student left after those first 30 minutes, never to return.

UNC has nurtured and created a hostile academic environment, preventing some Jewish and pro-Israel students from enrolling in courses on Israel and related topics — and also skewing the perception of Israel in the minds of uniformed and under-informed students. Chancellor Kevin M. Guskiewicz and other senior UNC administrators are to blame.

Peter Reitzes is a board member of Voice4Israel of North Carolina and writes about issues related to antisemitism and Israel.