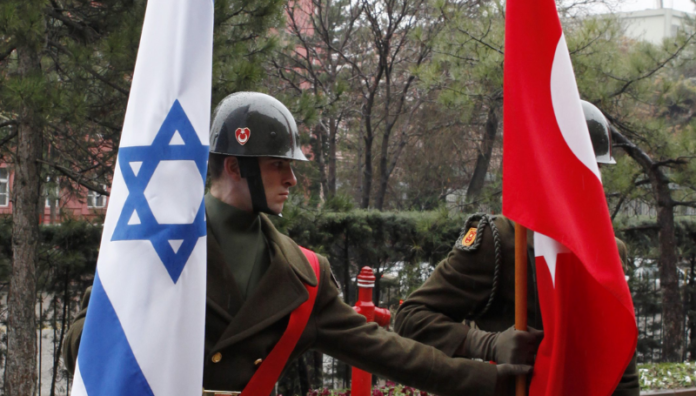 “Does Erdogan want to warm up ties with Israel or throw ice-cold water on them?”

You get to know a guy after 18 years.

And 18 years is how long Recep Tayyip Erdogan has led Turkey: the first 11 as prime minister and the last seven as president.

During that period, Israeli-Turkish ties went from the Golden Era to the Dark Ages. Not because Israel acted in a radically different way after Erdogan came to power in 2003 than it did beforehand when the two countries enjoyed a strategic alliance, but because Erdogan – with his deeply embedded Islamic worldview – fundamentally changed Turkey’s attitude toward Israel.

Erdogan turned Israel from ally into adversary, friend to foe, partner on the international stage to convenient whipping boy in order to gain political points domestically and tumultuous applause in the Muslim world.

Already in 2009, Israel’s ambassador at the time, Gabby Levy, was quoted in a Wikileaks cable as saying that Erdogan was a “fundamentalist” who “hates us religiously.” And that was before the Mavi Marmara flotilla incident in 2010, before Operation Protective Edge in Gaza in 2014, and before the US embassy moved to Jerusalem in 2018.

Lovely sentiment, though considering Erdogan’s track record, it’s rather difficult not to question his sincerity.

In May, following riots on the Temple Mount, the Turkish president had this to say about Israel: “Israel, the cruel terrorist state, attacks the Muslims in Jerusalem, whose only concern is to protect their homes and their sacred values, in a savage manner devoid of ethics.”

Yet, on Monday, his office put out a statement of his call with Herzog that said the Turkish president “underscored that Turkey-Israel relations were of great importance in terms of security and stability in the Middle East, and that there was a great potential for cooperation between the two countries in various areas, notably energy, tourism and technology.”

The very next day, however, his office put out another statement, less conciliatory, slamming Israel for house demolitions and saying “we condemn Israel’s unlawful and inhumane practices and hereby reiterate our support for the judicial process to hold Israel accountable for its crimes in the occupied territories.”

SO WHICH is it? Does Erdogan want to warm up ties with Israel or throw ice-cold water on them? Regardless, who would buy a used car from someone whose comments were so contradictory? It’s like a man courting a woman who first tells a friend that she is despicable, then checks to see if she might go out with him on a date, and then the day after he put out those feelers disparages her appearance.

Yes, Israel knows Erdogan well, and what it has come to know after 18 long years is a staunchly anti-Israel Islamist who consistently tries to inflame the Muslim world against the Jewish state, often peddling in antisemitic rhetoric to do so.

He is a leader with neo-Ottoman fantasies who supported the 2010 Mavi Marmara provocation where Israeli commandos boarded a ship sent to break Israel’s lawful naval blockade of the Hamas-controlled Gaza Strip and, after coming under attack, killed nine people on that ship.

Israel knows how Erdogan’s Turkey has hosted an office of Hamas, where attacks against Israelis have been planned. It knows about the money laundering for Hamas coming out of Turkey, as well as the provision of passports for members of the terror organization.

It knows about Turkish efforts to scuttle an Israeli-Cypriot-Greek natural gas pipeline; about the way it constantly tries to undermine Israel in various international forums; and about its occasional support for Iran (when it suits its interests).

And those are just some of the actions Ankara has taken against Israel. There are also the myriad actions it has taken against others in the region – from the Kurds to the Egyptians to the Cypriots and Greeks – that Jerusalem finds loathsome.

But when Erdogan calls and whispers sweet nothings, there is a natural tendency to want to say, “That’s marvelous – let’s give it a whirl and start anew.” Yet Israel must harbor no illusions about who it is dealing with.

In the readout of the call with Herzog that Erdogan’s office put out, the Turkish president was quoted as stressing that “the positive steps to be taken for the settlement of the Palestine-Israel dispute would also facilitate a positive course in Turkey-Israel relations.”

ISRAEL NEEDS to let Turkey know, however, that it has expectations and demands of its own.

If Ankara wants better ties to ease its regional isolation, help build better relations with the White House and benefit from what Israel has to offer in terms of “energy, tourism and technology,” then Erdogan needs to stop his strident anti-Israel and antisemitic rhetoric.

He needs to stop accusing Israel of genocide, stop comparing Israel to Nazis, stop aiding and abetting Hamas, stop trying to make inroads in Jerusalem, stop financially backing those agitating on the Temple Mount, stop blocking Israel at NATO and stop trying to torpedo the Jewish state’s burgeoning ties with other countries in the Muslim world. Just a few months ago, for instance, Erdogan threatened to recall his ambassador from the UAE to protest its establishment of ties with Jerusalem.

Israel, obviously, would benefit from an improved relationship and better ties with Turkey, not only because of increased trade but also because it is an important player in Syria and the wider region, which if not included inside the tent, can cause tremendous damage from outside of it.

At the same time, any move towards reclaiming some of the closeness that once existed between the two countries must not be done at the expense of stronger relationships that Israel developed in the interim with Turkey’s regional foes, and there are many: from Romania and Bulgaria in the Balkans, to Cyprus and Greece in the eastern Mediterranean, to Egypt and the United Arab Emirates among the Arab states.

Israel lost an important strategic partner when Erdogan altered the course of Turkey’s foreign policy in the first decade of this century. But rather than throwing up its hands and yelling “gevalt!” Jerusalem found ways to make up for what it lost in losing Turkey by allying with other countries in the neighborhood.

Those alliances must now not be jeopardized just because Erdogan today deems it in his interest to have better relations with the Jewish state – which he has made clear time and time again that he actually loathes.

The Turkish media played up the phone call with Herzog as an effort to restart ties with the advent of the new leadership in Jerusalem.

But here is the hard truth about Israel-Turkey ties: A true reboot of the relationship will only come about when Turkey finally gets a new leader, not when Israel does. And even when that day comes, it will take time to rebuild the trust because Erdogan has succeeded – through his constant demonization of Israel – in turning many of his countrymen against the Jewish state.