Iran, Russia, and Turkey: A Eurasionist Model of Foreign Relations 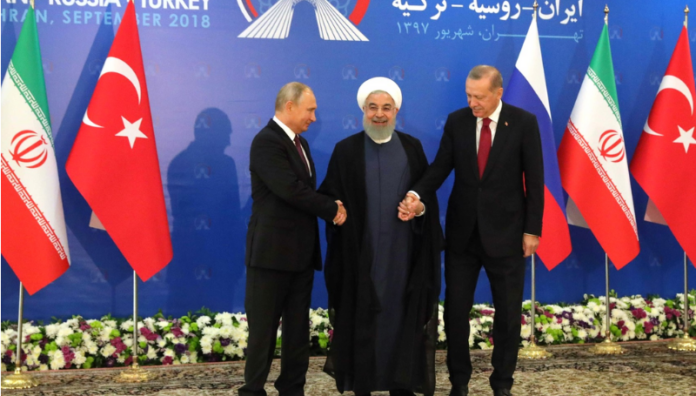 “The players have not formed an alliance; in fact, the opposite is in place. They cooperate, compete, seek each other’s help, and turn their backs on one another as they see fit.”

Because Westerners tend to place the idea of cooperation among nations under a normative umbrella, whether it be an alliance or some other legal mechanism (as is often the case in the West), analysts and pundits have been mischaracterizing the ongoing Russia-Turkey-Iran cooperation as an alliance. This both underestimates and overstates the interaction between the three pivotal Eurasian states.

The players have not formed an alliance; in fact, the opposite is in place. They cooperate, compete, seek each other’s help, and turn their backs on one another as they see fit. This kind of interaction is very similar to the 19th century concert of European powers in which mistrust ran wide, but the powers nevertheless wished to find common ground where necessary and achieve a balance to avoid the imposition of one power’s will on the others. They also shared the overarching belief that a changing world order is something to be feared.

Several threats have brought Iran, Turkey, and Russia together: the war in Syria; terrorism and extremism; and, to an extent, Kurdish separatism (Russia shares Ankara’s and Tehran’s concerns about this). Crucially, US pressure of varying degrees on each of the three powers serves as glue to promote their cooperation in resisting the liberal world order. The three seek to remake the world order as they no longer benefit sufficiently from post-Cold War arrangements. Each wants new space for balancing.

Their ideas vary, however, in terms of the depth and breadth of the necessary changes. Iran seeks a complete overhaul, as its revolutionary fervor and geopolitical outlook are in diametric opposition to the US-led world order. Russia is also a revisionist power but its demands for fundamental changes are less radical, as it gains some advantages through the liberal world order.

Turkey seeks to balance between the US and Russia. This has become one of the most important aspects of Ankara’s Middle East and Mediterranean policy. Turkey argues that in the evolving world order, it should be free to cooperate with any global actors depending on its interests, but none of those relations should be considered fixed.

Significantly, the Russian, Turkish, and Iranian peoples all have a similar historical experience of anti-imperialist struggle. They believe “Eurasia” can provide an alternative to the West’s cultural, historical, political, and economic dominance.

More importantly for smaller countries, the three also advance the concept of “regional ownership,” which prioritizes bilateral cooperation in regional problems without the involvement of third parties. In this way, Turkey and Russia pursued a shared vision in the Black Sea and cooperated in the South Caucasus following the Second Karabakh War. Efforts were made in Libya as well, and similar ideas were expressed (at least rhetorically) about the recent crisis between Israel and the Hamas organization.

Iran has similar aspirations to Russia when it comes to the Caspian Sea. No foreign powers are allowed into the region, and smaller states with access to the Sea have to acknowledge Tehran’s and Moscow’s vital energy and security interests.

The trio’s aspiration to sideline the West is visible in concrete initiatives. The Astana Talks are nothing but an attempt to advance an alternative vision to the Syrian problem. Similar attempts were made in the South Caucasus, when Turkey and Iran proposed and supported the idea of creating a regional pact on security and cooperation that has no place for the West.

Russia has long aspired to better ties with Turkey and Iran. Even in the Soviet period, Moscow periodically attempted to advance a form of cooperation with those two countries that would exclude the West. Both states gradually emerged as pillars of Russia’s post-Soviet aspirations to construct a more active foreign policy in the Middle East and remold the existing world order.

Though Turkish Eurasianism is inimical to the Russian version, from the late 1990s Russian neo-Eurasianists began looking at Turkey in a more positive light. The current Russian leadership might not be radically neo-Eurasianist, but the seeds of the modern reliance on Turkey has its roots in the ideological fervor of the 1990s.

While underlying currents on both the regional and global levels are pulling the trio closer together, this does not imply that the parties will attempt to create an official grouping with formal alliance obligations. This is what sets them apart from the West. Iran, Russia, and Turkey see the absence of a formal alliance as a boon. It allows them to maneuver, balance, and honor each other’s vital spheres of influence.

This trend of finding common ground without formal obligations is characteristic of the post-unipolar world. Russia and China officially refuse to have an alliance—indeed, they claim an alliance would undermine their purportedly benevolent intentions toward one another. While much of this is just rhetoric to conceal the absence of any common cultural or otherwise important features necessary for a geopolitical alliance, this behavior is part of an emerging trend in which Eurasian states prefer maneuverability to the shackles of formal obligations.

For Russia, intensive cooperation with Turkey and Iran is beneficial in as much as it provides leverage over the West and allows Moscow to solve critical problems in the Black Sea, Caucasus, and Caspian regions, as well as Syria. With that said, it is doubtful how much Russia wants Turkey to completely sever its ties with NATO. In a way, Turkey’s position as a member of the alliance—one that generates continuous intra-alliance tensions—benefits Russia more than an unshackled Turkey would. The latter scenario would ease NATO’s internal problems and perhaps even diminish Turkey’s importance in Russia’s geopolitical calculus.

As far as Iran is concerned, Russia seeks to render the Islamic Republic dependent on its diplomatic clout. A long-term solution to Iran’s nuclear stalemate is the Kremlin’s least desired scenario. While it would allow Russian companies to penetrate Iran’s market, that market would also be opened up to more competitive Western enterprises. A closer interaction beyond the partnership is also not an option for Russia.

For Moscow, keeping Ankara and Tehran close will be a constraining geopolitical weight, but distancing from them would be detrimental as well. Russia is trying to maintain a delicate balance with the two.

Turkey and Iran naturally have their own agendas. Each plays the Russian card to get concessions from the West, and for each, a complete severing of ties with the West in a non-starter. Turkey understands that while its over-reliance on the West as a balance against the Soviet Union during the Cold War era was costly to Ankara, its reliance on Russia as a balance against the US could be similarly disquieting. Iran, too, is unwilling to commit solely to the Russian card. Balancing between the West, China, and Russia is arguably the best choice.

This mixture of different interests makes the interaction between the three all the more surprising. But the trio shares similar objectives, and each needs the other two to help it maneuver in its relations with the West.

The trio has introduced a new pattern of ties—one unconstrained by formalities but still driven by long-term shared interests. This Eurasian model is a byproduct of an evolving global order in which each state with geopolitical influence recalibrates its foreign policy ties. Russia is critical here, and its efforts to have Turkey and Iran play the role of disruptors have brought results. But we have also seen Ankara and Tehran pursue their own game by sticking with Russia only intermittently.