Inside the Insurance anti-oil Cartel 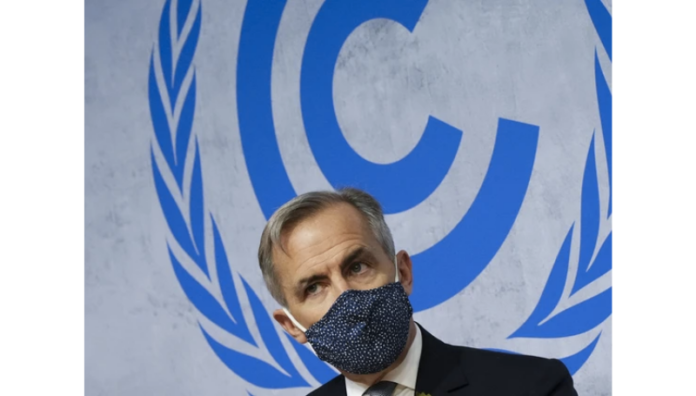 “In recent days, amid the clamour for action at COP26, the line-up of non-government financial institutions planning to kill investment in the Canadian and global fossil fuel industries has expanded.”

The Trudeau government has proudly signed Canada on to a global agreement with 20 other nations pledging to stop government agency funding of oil and gas development in other countries. “The intention,” said Natural Resources Minister Jonathan Wilkinson, “is no ongoing financing related to exploration and production of fossil fuels.”

As for oil and gas investment in Canada, presumably Wilkinson and the Trudeau green team are counting on the global private financial conglomerates to block funding to the country’s energy corporations. In recent days, amid the clamour for action at COP26, the line-up of non-government financial institutions planning to kill investment in the Canadian and global fossil fuel industries has expanded.

The highest profile private sector anti-carbon action plan came from Mark Carney’s Glasgow Financial Alliance for Net Zero (GFANZ), an agglomeration of 450 financial institutions that Carney claims have the global ability to strip trillions of dollars from the oil and gas industry in years to come. Most of the world’s big banks are members of the Net Zero Banking Alliance, including Canada’s chartered banks.

The operation of these alliances is still being worked out by Carney and his associates. Their collective role as powerful controllers of the financial system smacks of corporate cartelism, a point made by William Watson in “ Who elected the bankers? ” on this page the other day. More importantly, Watson accurately describes the GFANZ movement as the creation of a cartel, a Carney cartel through “an agreement to restrain trade.”

Tracking how big GFANZ financial institutions determine which corporations to knock off is an interesting exercise. The operations of the Net-Zero Insurance Alliance (NZIA) as part of the GFANZ initiative is instructive, including the role of one of its members, the Paris-based conglomerate known as AXA.

To mark COP26 and the GFANZ plan, AXA announced it will curb its provision of investment and insurance services to corporations engaged in unconventional exploration and production. AXA’s chief executive said the insurer will make its business decisions “based on a restrictive selection process” using a list of identified energy companies on the Global Oil and Gas Exit List (GOGEL). Five per cent of the companies on the GOGEL list meet AXA’s criteria for cutoff.

The GOGEL list was released last week in Glasgow by a group of NGOs, including the usual green suspects. It claims to provide all the information GFANZ members need to target 887 companies that account for 95 per cent of the world’s oil and gas production. The GOGEL message is that the world needs “an immediate end to oil and gas exploration and to the development of further oil and gas fields.” Among the “dirtiest producers” is Canada’s Suncor Energy, Cenovus Energy and Canadian Natural Resources.

One of the big backers of GOGEL is an outfit called Urgewald. Based in Germany, Urgewald is an activist NGO with charitable status in the United States. It is also backed by (among many charities) one of the Rockefeller operations that has funded anti-oilsands activity in Alberta. Tom Kruse from the Rockefeller Brothers Fund is quoted by Urgewald saying that GOGEL is “the database we have all been waiting for. It is public, it is meticulously researched and it is an essential tool to help us end the age of fossil fuels.”

The world’s major insurers have been actively attempting to sideline fossil fuels, especially Canada’s oilsands and pipelines , for some time. The pipeline de-insurance movement is led by the same group of NGOs identified in the recent Alberta report on the charitable funding of anti-fossil fuel activism.

Instead of resisting the NGO push, the insurers are joining it by forming a cartel to quash the oilsands and other projects.

This does not mean that insurance options are unavailable to Canada’s energy companies. But two sources in the energy and insurance industries report that competitive options are declining. “More than half of the large global insurers now have some restriction on coverage of oilsands or other forms of oil and gas production/refining,” said one. Insurance rates have “materially increased” and are likely to continue rising in future.

And so, based on the initiatives of NGOs and activists funded mostly as charities, the world is heading toward a financial system which aims to eliminate the use of fossil fuels. It’s an objective deemed impossible by all but the most extreme activists, but has been adopted by the financial cartels as the foundation for investment, lending and insurance.

And as one Canadian industry commentator put it, if Canada does not meet demand, fossil fuels will be entering the world economy from Russia, Saudi Arabia, Venezuela, China — all countries that compete against Canada.

As Watson suggests, competition can often be counted on to curb the activities of cartels. Maybe other insurance companies and techniques will emerge to fill the gap left by AXA and the other insurance firms. Certainly, however, the competition to supply the world with fossil fuels will continue, leaving Canada and Alberta frozen in the hands of green activists supplying the insurance and banking industry with ammunition to kill it.