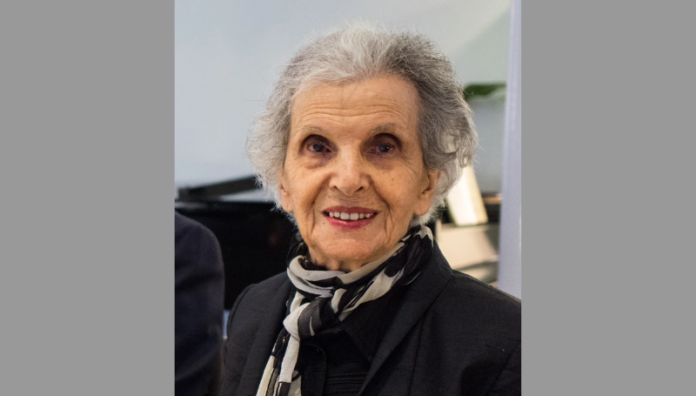 Strong, hard-working, dressed impeccably, wearing fabulous sunglasses reminiscent of Audrey Hepburn – that was Mary Binder. She was a Holocaust survivor, and underneath the glamour was a deep sadness and stoicism.

She was born Mindla Zylberstajn to a traditional Jewish family in Poland. When the Holocaust began, she was just 15. Her father was killed by the Nazis at the outset of the war.

In later years, while Mary rarely spoke about life during the Holocaust, she did speak about how quickly life changed. She went from being an active teenager to being stripped of freedoms and forced to make impossible choices. A non-Jewish neighbour offered to smuggle her younger sisters, Sara, 8, and Dora, 11, to live with family in a larger, hopefully safer, town. Sara and Dora were never seen again. Together, Mary and her mother, Esther, survived ghettos, Auschwitz, the death march to Ravensbruck concentration camp, and finally to Neustadt, where they were liberated in 1945.

Mary met Jack Binder (born Urbinder) that same year in Poland and they married in 1946. With everything lost in the war, they became self-taught entrepreneurs.

The couple first moved to Berlin, where they dabbled in trading various goods and found their niche in precious stones. Mary quickly became an expert in evaluation and appraisal, and they opened a retail jewellery store in Berlin. Notwithstanding their commercial success, memories of the war prevailed and they did not want to continue to build a life in Europe.

In 1948, Jack, Mary and Esther sold everything and travelled first class to New York – Mary was so proud of that ticket. She went from the depths of despair in the Holocaust to travelling first class to America. They lived in the Bronx with cousins and then bought a chicken farm in Vineland, N.J. Mary learned English through magazines, short stories, television and by reading a dictionary. Eventually, she took English lessons. They were resilient and capable people.

Finally, in 1955 Mary and Jack moved to Toronto, where they had friends and family. They spent the rest of their lives in the city, creating and running a construction business while raising two sons, David and Lenny.

David remembers fondly how his mother was determined to connect her sons to Canadian life – they learned to ski, play hockey, attended summer camp and spent summers at a cottage with the family in Muskoka. She was also committed to keeping her family connected to Jewish values – the boys were enrolled in Jewish day school and attended synagogue and Shabbat lunches with extended family. The connection was important to Mary.

After Jack died in 1979, Mary stepped into the family business full time. She learned the ins and outs of real estate and property management and ran that business successfully until she retired in 2008 at the age of 84.

War may have halted Mary’s education early, but she was fluent in five languages and a voracious reader of history and philosophy. At 59, she achieved a formal education by graduating from York University with a BA in French literature.

In the later part of her life, Mary lived on the 15th floor of a Toronto condo building, she kept in shape by taking the stairs up and down. She liked to work out in the gym and play tennis. She’d work out her brain by playing (and winning) at Scrabble and reading from her extensive library. She loved talking to her children and grandchildren about their dreams and goals.

Despite her battle with Alzheimer’s, Mary continued to live at home with the support of caregivers and family. She was dedicated to family and her home was filled with photos of her children, grandchildren and husband. Mary’s family remains inspired by her formidable intellect, talent, drive and devotion