Eli Lake: Afghanistan and the Return Of Cruise-Missile Diplomacy 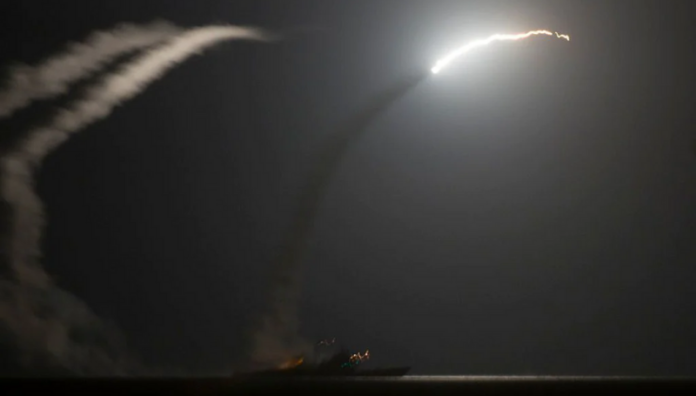 “Biden’s surrender in Afghanistan, and the predictable consequences of that decision, have made effective counterterrorism there impossible.”

A paradox of President Joe Biden’s decision to end the war in Afghanistan is his vow to keep fighting the wider battle against terrorism even in the country he has just abandoned.

It has been a theme of Biden’s administration since he announced the unconditional withdrawal in April. The president has talked of an “over-the-horizon capability that will allow us to keep our eyes firmly fixed on any direct threats to the United States in the region.” After the suicide blast at the Kabul airport last week that killed 13 American service members, Biden promised to “hunt down” the perpetrators. On Tuesday, Biden warned the perpetrators of that attack, ISIS-K: “We are not done with you yet.”

It’s possible that the president and his aides believe all of this. No one else should.

Biden’s surrender in Afghanistan, and the predictable consequences of that decision, have made effective counterterrorism there impossible. The Taliban’s victory has led to the collapse of the Afghan military and intelligence services that helped monitor insurgents and terrorists in the country.

This leaves two options. The Biden administration can continue its shameful “partnership” with the Taliban to root out ISIS-K. This would end up legitimizing and maybe even funding an outfit that is interwoven with al-Qaida. The youngest son of the Taliban’s spiritual leader, for example, volunteered for a suicide bomb attack in 2017, while the new chief of security for Kabul is a designated U.S. terrorist with a $5 million bounty on his head. Does a counterterrorism partnership with this organization seem possible or desirable?

The other option for Biden’s campaign against ISIS-K or al-Qaida in Afghanistan is what is known as cruise-missile diplomacy, which displays a kind of toughness without the complications and unpredictability of involving ground forces. A president can order an airstrike on a training camp or weapons factory in response to a terrorist attack or some other affront to U.S. interests and honor, such as Saddam Hussein’s decision to expel weapons inspectors from Iraq.

Former President Bill Clinton used cruise-missile diplomacy in 1998 after al-Qaida attacked U.S. embassies in Kenya and Tanzania. One of Clinton’s targets was the al-Shifa complex in Khartoum, Sudan. At the time, Clinton said this was a facility with links to al-Qaida that was making nerve gas. That intelligence turned out to be wrong — and the Sudanese government, for its part, has long claimed that al-Shifa was an aspirin factory.

Fast forward to the present, and the parallels are obvious. The drone strike on Sunday that the Pentagon originally said had stopped a vehicle bomb headed to the Kabul airport looks like it was something else. Hours after the strike, a family in Kabul said the U.S. hit the wrong target.

The difficulty of getting timely and accurate intelligence against targets without a U.S. presence on the ground is not the only parallel. As the nation learned last week, the first drone strike against an ISIS-K “planner” was a response to an act of terror. There is a reason that no U.S. president in the last 20 years decided to withdraw troops from Afghanistan: because the U.S. was there to prevent another terrorist attack on the scale of 9/11. The goal of post 9/11 counterterrorism was prevention. The goal of cruise-missile diplomacy was to establish deterrence and to project U.S. resolve.

One lesson from cruise-missile diplomacy is painfully clear: It is woefully inadequate. After Clinton’s strikes against alleged al-Qaida facilities in 1998, the group went on to attack the USS Cole in October 2000 and of course the World Trade Center and the Pentagon in September 2001. The memory of 9/11 kept America in Afghanistan for 20 years — and while the mission was a slog and the fighting a stalemate, U.S. boots on the ground helped to prevent another 9/11-scale attack on U.S. soil.

Now Biden is about to find out whether the U.S. can prevent domestic terrorist attacks without any troops in Afghanistan, from where those last attacks originated. For his sake and the nation’s, he should remember the lesson that cruise-missile diplomacy doesn’t prevent terrorism from happening. It only punishes it after the fact.