China and Russia Race Ahead of America 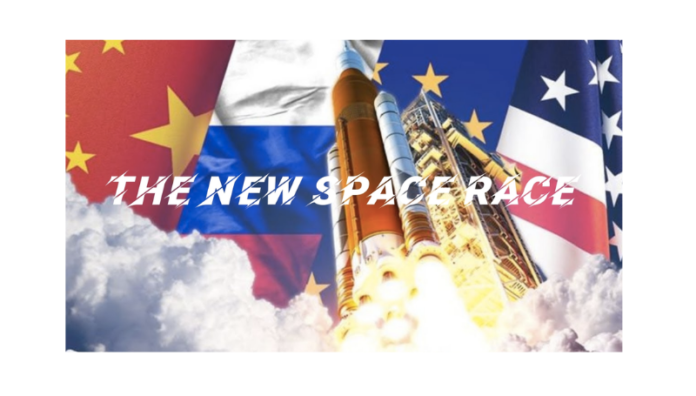 “A successful assault on US satellites would paralyze the US and allied armed forces.”

Over the past several weeks a hard truth has become undeniable: The United States of America is no longer the all-powerful superpower it has been since the end of the Cold War. Far from it. The strategic implications of this state of affairs are epic for both the US and its allies.

For over a generation, US leaders eschewed “the weaponization of space.” But as they congratulated themselves for their restraint, the Chinese and the Russians weaponized space.

On Nov. 16, Russia launched a surface-to-air missile into space that destroyed an antiquated Cosmos spy satellite located dangerously close to the International Space Station. The satellite exploded into 1,500 pieces, all of which were large enough to imperil the space station and the eight astronauts (including two Russians) on board. NASA responded with a nasty condemnation.

This brings us to China.

China’s anti-satellite program is far vaster than Russia’s. China has missiles capable of destroying satellites and it fields laser and jamming technologies capable of blocking satellite communications. Last month, China raised its anti-satellite capabilities up several notches with its launch of Shijian-21. Shijian-21 is a satellite with a robotic arm which the Chinese claim is geared towards cleaning “space junk.”

US Air Force Gen. James Dickinson has a different, more plausible explanation for the arm’s purpose. Speaking to Congress in April, Dickenson said, “Space-based robotic arm technology could be used in a future system for grappling other satellites.”

In other words, the “space junk” China was referring to is US satellites.

A successful assault on US satellites would paralyze the US and allied armed forces. Depending on how badly US satellites are crippled, an anti-satellite strike could also devastate the US economy and much of the global economy. In an interview last weekend at a security forum in Halifax, Canada, deputy US Space Command Commander Gen. David Thompson discussed the US response to the aggressive actions China and Russia are taking against US satellites.

Thompson said that Space Command is focused on hardening “the architecture” of US satellites. The idea is to massively increase the number of satellites and to disperse them while changing the way they communicate with each other and with earth to diminish the threat that either space-based on ground-based attacks against them could pose to the US and its allies. The problem is that all this costs money. And it isn’t clear whether the money will be forthcoming, and how long it will take to build the requisite defenses.

Thompson didn’t directly discuss US offensive capabilities against Chinese or Russian satellites. He did note that destroying satellites with surface-to-air missiles is a fairly simple task that any state with ballistic missiles can accomplish. Missile technology expert Dr. Stephen Bryen noted in a recent episode of my webcast that the US is capable of launching its own satellite-killing satellites. But to date, the Pentagon has expressed no interest in doing so.

The fact that both Russia and China have the capacity to destroy and sabotage US satellite systems would be bad enough if it were the only aspect of the two powers’ weaponization of space.

But it isn’t the only – or even biggest — threat the US faces from its adversaries’ weaponization of space. The threat of hypersonic missiles is far worse.

Hypersonic speed is anything between five and 20 times the speed of sound. According to Gen. John Hyten, US Deputy Chief of the Joint Chiefs of Staff, over the past five years, the Chinese have conducted hundreds of hypersonic missile tests while the US conducted only nine. The main danger emanating from hypersonic missiles is that they are guided from the moment of launch to the moment of impact. They can change direction throughout their flight. Combined with their high speeds, hypersonic missiles are difficult to detect and impossible to intercept.

Last month, the Financial Times revealed that over the summer China launched a hypersonic missile that successfully circled the earth before accelerating to its designated target. The Americans were reportedly stunned by the Chinese launch. They had been operating under the belief that the Chinese were several years away from that sort of capability.

The Russians first deployed hypersonic missiles in 2018. Since then, they have developed and deployed ground, air, naval and space-based hypersonic missiles. Last week Hyten warned the Chinese system looks like “a first strike system,” that is, it can form the basis of a Chinese surprise nuclear attack on the US.

Earlier this year the US and Israel finalized an agreement to jointly develop the Arrow 4 missile defense program. The program will be carried out by Israel Aircraft Industries and Lockheed-Martin. One of its goals is to develop and deploy a system to defend against hypersonic missiles. Since there are no Middle Eastern powers with hypersonic capabilities, the implications of the Arrow 4 program are clear. For the first time, the US is working with Israel to develop technologies that will primarily protect the US.

At the Halifax forum, Thompson acknowledged that the US currently has no hypersonic missiles. Although the Army, Navy and Air Force are all developing hypersonic systems, he admitted that it will take years for the US to achieve the capabilities Russia and China already have. In other words, over the next several years, Russia and China will enjoy a strategic advantage over the US the likes of which they’ve never seen. Their hypersonic missiles, combined with their anti-satellite capabilities and their seriousness of intent render the US more vulnerable to foreign attack than it has been since World War II.

All of this would be far less disconcerting if the US were demonstrating any seriousness of intent either towards its allies or its enemies. But the opposite is the case.

Hyten was asked whether China’s hypersonic missile test represented a new “Sputnik moment,” like the panic that seized the Americans after the Soviet Union became the first nation in space with its 1957 launch of the Sputnik satellite. That panic spurred massive investment in US technology development. Hyten’s response was instructive.

Space isn’t the only place where the US is responding with a shrug to rising threats. Take Iran and its nuclear program for example.

Needless to say, whereas the US is now behind China and Russia on space-based weapons, it is well ahead of Iran on all weapons. As Iran sprints towards the nuclear finish line, the US could fairly easily block it from becoming a nuclear power. But neither US enemies nor US allies believe it has any intention of doing so.

Ahead of the reinstatement of the indirect nuclear talks with Iran in Vienna next week, the administration took some steps to build up its credibility with its allies. Defense Secretary Lloyd Austin travelled to Israel and the Persian Gulf states and proclaimed the US isn’t abandoning them. US Central Command held the first-of-its-kind joint air force exercise that included Israel, the UAE and Bahrain. And US B-2s flew over Israel escorted by Israeli F-15s.

All of these steps were duly reported with the requisite enthusiasm. But no one took them seriously. This is true for two reasons.

First, the purpose of the talks in Vienna is to persuade Iran’s fanatical new leaders to accept the temporary (and rapidly expiring) limitations the 2015 nuclear deal placed on its nuclear activities in exchange for a mass influx of cash through US sanctions relief. If Iran agrees to the deal, it will still pass the nuclear threshold in relatively short order. At the same time, if the US abrogates its economic sanctions, Iran will have the economic wherewithal to massively escalate its proxy wars against Israel and the Sunni Gulf States.

Second, the gestures the administration’s made to its allies to demonstrate its credibility were cancelled out by its other actions. While protesting its commitment to blocking Iran’s path to the bomb, the US failed to respond to Iranian aggression against its own forces in Syria and the Persian Gulf. And following in the footsteps of the Obama administration, last week a senior administration official told the New York Times that the US opposes all Israeli actions against Iran’s nuclear installations. The message was clear. And everyone got it.

America’s posture towards Russia and China is little different. Over the past several weeks, Russia has deployed nearly a hundred thousand troops along Ukraine’s eastern border. Kiev is warning a Russian invasion could come as early as January. But it was only this week that the administration began discussing the possibility of sending defensive weapons and military advisors to Ukraine. So too, the EU and the US are only beginning discussions on the possibility of imposing economic sanctions on Russia. And they will only be imposed – if they are imposed at all — after Russia invades Ukraine.

The situation is even more dire in relation to China. Last week Biden held a much-awaited online summit with Chinese President Xi Jinping. It was held at a time of heightened tensions between the two superpowers exacerbated by China’s escalating threats against Taiwan.

As retired US Marine Col. Grant Newsham from the Center for Security Policy in Washington DC explained to Newsweek, “American credibility will be destroyed in the Asia-Pacific and globally as well,” if the US fails to defend Taiwan.

Given the stakes for the US itself, Biden might have been expected to warn Xi that the US will not stand idly by if Beijing continues threatening Taiwan. But apparently this didn’t happen.

Chinese media reported that Biden and Xi are on the same page in relation to Taiwan. Biden’s supine posture on Taiwan was not the only area he displayed weakness. He failed to call China out for its refusal to cooperate with international investigations into the origins of COVID-19. He also didn’t mention China’s rapid nuclear buildup or its aggressive actions in space.

Biden did speak at length about climate change, though.

Together with its allies, the US is still the most powerful nation on earth. It can still defeat, or at a minimum, massively harm all of its enemies. But whether it is dealing with Iran or China, Russia or Afghanistan or beyond, America’s strategic credibility is in tatters. Neither its allies nor its enemies take its commitments or its threats seriously. Consequently, as it lags behind its adversaries in space weapons, the US projects a weakness of intent that invites aggression against itself, against its interests and against its allies.

isranet org
Previous articleUS Pressure Is Pushing Russia-China Cooperation to New Levels, Beyond Defence
Next articleChina Locks Down Its History, to Its Peril and the World’s

Reid Standish Radio Free Europe/Radio Liberty, June 9, 2022 “…it's actually unclear to me if the Russians will even be able to capture all of Luhansk...
Read more
Analysis

Stefan Hedlund GIS Reports, June 21, 2022 “With NATO troops present on the ground in Finland, the Russian rear would be dangerously exposed to missile and...
Read more
Analysis

The Military Roots of Modern Ukraine

Taras Fedirko WSJ, May 26, 2022 “If the country withstands this conflict, it will remain militarized in anticipation of future aggression from its hostile neighbor.” “War made...
Read more