“Given the enormity of the harm he has done, the only honourable thing for Biden to have said was “I resign”.  Instead, he insisted that the operation at Kabul airport was an “extraordinary success”.”

Incredibly, US President Joe Biden has doubled down even more strongly on the disaster he has inflicted upon both Afghanistan and the west.

His speech yesterday was beyond jaw-dropping. Here was an American Commander-in-Chief responsible for a catastrophe which has not only brought a deadly enemy of the free world to power, but also left it in control of unknown amounts of American military ordnance which will vastly increase its capabilities.

A catastrophe in which the US abandoned its Bagram airbase, which could have provided much more capability and security for a mass evacuation than Kabul airport but which the Americans incomprehensibly fled overnight on July 1 without even informing their Afghan allies — and thus demoralised and panicked the Afghan army.

A catastrophe in which Biden’s inflexible deadline created a lethal stampede of Afghans desperate for a flight out of the country, which overwhelmed the American and British troops at Kabul airport and left countless numbers of Afghans dead or beaten by the Taliban.

In which Biden thus created the incentive for a terrorist atrocity which duly occurred and killed at least 170 Afghans and 13 American service personnel, one of the largest losses of American life in a single attack there.

In which the US left behind untold numbers of American hostages and Afghan allies to whom it owes a duty of responsibility, all of whom are now trapped and vulnerable to one of the most ruthless and barbaric regimes on earth.

In which the US has facilitated the creation of “jihad central” in Afghanistan which will act as a physical magnet for jihadis, galvanise untold additional numbers elsewhere and vastly increase the terrorist threat to the west.

And in which, by advertising American lack of resolve to do what it takes to defend the free world, the Biden administration has now incentivised and energised those in China, Russia, and Iran as well as jihadis everywhere intent on bringing the free world down.

Given the enormity of the harm he has done, the only honourable thing for Biden to have said was “I resign”.

Instead, he insisted that the operation at Kabul airport was an “extraordinary success”. He implied that everything apart from the Afghan army’s collapse and the flight of the Afghan president had gone according to plan. He accepted no responsibility for any failings in the operation, which were all apparently the fault of others.

Suggesting falsely that all those left behind had chosen to stay, he said:

we will make arrangements to get them out if they so choose… We will continue to work to help more people leave the country who are at risk.

How? How will he ensure that they escape the Taliban to whom he has now abandoned them?

America, he claimed, would now strike terrorists and targets in Afghanistan without American boots on the ground. But how will it obtain the information to do so, since he has now removed the intelligence gathering infrastructure from that ground along with those boots?

We’ve shown that capacity just in the last week. We struck ISIS-K remotely, days after they murdered 13 of our service members and dozens [of] innocent Afghans.

But what he failed to mention was that a second such US attack by a drone-launched missile, ostensibly directed at another bombing cell, killed instead a family which reportedly had no terrorist links. In this second strike, ten people were blown to pieces including seven children and a former army officer and contractor with the US military who had come from western Afghanistan in the hope of being evacuated from Kabul.

Remember why we went to Afghanistan in the first place? Because we were attacked by Osama bin Laden and al Qaeda on September 11, 2001. And they were based in Afghanistan. We delivered justice to bin Laden on May 2, 2011, over a decade ago. Al Qaeda was decimated. I respectfully suggest you ask yourself this question: “If we’d been attacked on September 11, 2001 from Yemen instead of Afghanistan, would we have ever gone to war in Afghanistan even though the Taliban controlled Afghanistan in the year 2001?” I believe the honest answer is no. That’s because we have no vital interest in Afghanistan other than to prevent an attack on America’s homeland and our friends. And that’s true today.

But all of that is exactly why it was imperative that American forces remained in Afghanistan. Because withdrawing those forces has made a resurgence of al Qaeda all too likely once again, as well as the empowerment of Islamic State and other terrorist groups.

The claim that the killing of bin Laden neutralised Afghanistan as a potential danger to the west is beyond ridiculous. What Biden has done is negate the gains made through investing blood and treasure in Afghanistan for two decades in order to protect the west — however muddled the implementation of that goal may have been — and he has thus dishonoured the sacrifice of all those who gave their lives in that process.

Whether this speech consisted of Biden’s own words, or whether someone else wrote them and he merely read them out, they are shocking. For the damage his administration has done is unforgivable and incalculable.

Consider how the Taliban have been galvanised by what’s happened. Anthony Lloyd of The Times reports from the Bagram airbase:

Maulawi Hafiz Mohibullah Muktaz, a religious leader and fighter from Kandahar aged 35, leaned back in his seat laughing, twiddled some dials on a control console, stared out across the multibillion-dollar base the size of a small city and picked up a phone to summon an imaginary jet. 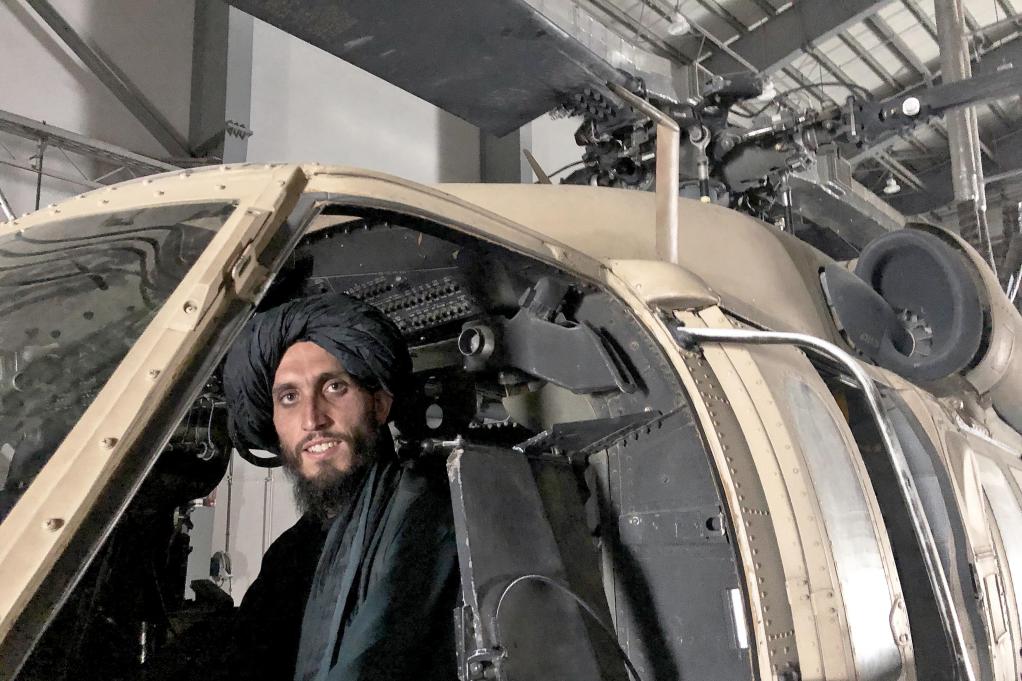 “Never in our wildest dreams could we have believed we could beat a superpower like America with just our Kalashnikovs,” he beamed, staring across the two runways beneath him.

…“When you do jihad all doors open,” he added, unable to stop smiling. “Our lesson is that we defeated America with our faith and our guns and we hope now that Bagram can be a base for jihad for all Muslims.”

But the Taliban didn’t overwhelm a superpower. The reason it is now in control in Kabul is that the US cut and ran. The Afghan army was only able to function effectively with the assurance of American back-up. As soon as former president Donald Trump decided that this back-up would go, the Afghan army started to crumble; and when Biden set the inflexible August 31 pull-out deadline, the Afghan army collapsed and chaos ensued.

The Taliban did not defeat the United States. The United States defeated itself. That’s why the Afghan debacle is so shattering for the whole of the free world; and why Biden’s arrogant and obstinate remarks, showing that he has learned no lessons whatsoever from a calamity he caused but for which he takes no responsibility, are as ominous as they are contemptible.