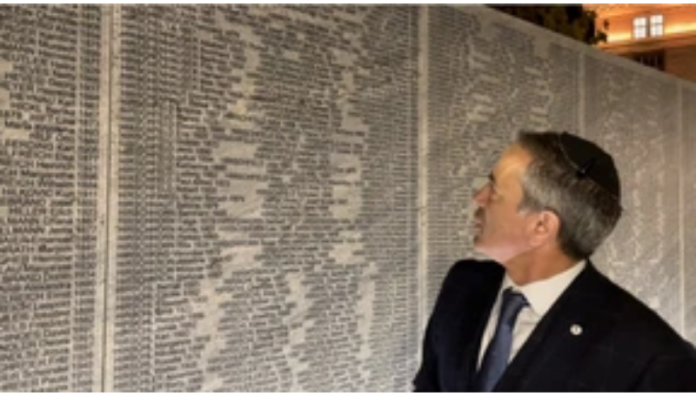 Hundreds of thousands of Austrian Nazis went on with their lives following the Second World War and the Holocaust. Some estimates range between 800,000 and 950,000 Austrians actively engaged in Hitler’s war against the Jews of Europe and were part of the National Socialist Party. Many resumed ordinary lives and careers, melting back into society after the genocide. They raised families, enjoyed life and died in dignity. Unlike Jewish victims of the Holocaust, their families have a graveside to visit and pay their “respects.”

But what of the children and grandchildren of the six million Jewish children, women and men murdered in the Shoah? Where do they say Kaddish (Jewish prayer for the dead). Do they not deserve the same rights, at the very least as the descendants of Nazis? These were the sentiments spoken by Mr. Kurt Yakov Tutter at a reception in his honour at the Austrian Chancellory this week. In a moving tribute for his campaign to erect the Shoah Wall of Names in Vienna, he was awarded the Ehrenzeichen für Verdienste um die Republik, similar to the Légion d’honneur in France.

Times are changing in Austria as the nation’s leaders are forcing the country into a moment of truth and reconciliation. Eighty-three years ago, during what is referred to as the November pogroms (also known as Kristallnacht), 112 synagogues and prayer houses were destroyed, while 8,000 people were arrested and 5,000 deported to Dachau concentration camp. Before the Holocaust, 191,481 Jews lived in Austria while no more than 5,000 were left in the country at its conclusion. One eyewitness account from Nov. 10, 1938 summarized the basic Austrian indifference to Kristallnacht: “In general, there is otherwise the usual Viennese calm.”

For decades Austrians avoided facing the historical truth of their own complicity in the Holocaust. Martin Engelberg, the only Austrian Jewish parliamentarian, told me that in his childhood, Austria’s history stopped in 1918. But today, Austrians are not only being taught about the Holocaust, they have now inaugurated a monument for the nation to recognize and name the 64,400 Austrian Jews who were murdered as a result of the nation’s warm embrace of Nazi Germany — referred to as the Anschluss.

At the Inauguration of the Wall of Names held on Nov. 9 — the eve of Kristallnacht, Chancellor Alexander Schallenberg said, “we have to protect Jewish life. Our responsibility does not end at Austria’s border. We Austrians have a special responsibility to Israel. When Jews all over the world can live in freedom, only then does the meaning of never again become realized.” Indeed, under the previous leadership of Chancellor Sebastian Kurtz, Austria began a U-turn toward Israel — even raising the Israeli flag over the Chancellery during the Hamas aggression against Israel this past May. Austria has been leading the way at the European Union and mostly voting favourably for Israel at the United Nations.

Canada’s Honourary Consul General of Austria, Marc Bissell expressed that “Austria has taken many steps forward in recent years. The Shoah Wall of Names is a massive step forward. I feel it’s a recognition for both of my great-grandmothers whose names will be on it, that they are not forgotten and through this process, we have remembered them and that’s very special to me and my family.”

In my meeting with Karoline Edtstadler, the Federal Minister for the EU and Constitution at the Federal Chancellery and one of the architects of Austria’s fight against anti-semitism, she expressed that the former generation of Austrians acted out of bad conscience. “Now we have the feeling that we want to have a flourishing Jewish life for the future of Austria. Monuments like this give meaning to history and how many people were actually murdered. We cannot have

a future without reflecting on the past”. Indeed, Edtstadler has been at the forefront of liaising with the Jewish community here in Vienna and implementing a national strategy against anti-semitism — one of three European nations to do so.

President of the Jewish Community of Vienna Oskar Deutsch lamented that while he is proud to see progress in Austria and a vibrant community life that is flourishing, anti-semitism has increased markedly. Over the last six months, the community has registered nearly six hundred incidents of anti-semitism. More significantly, the central community organization which he leads is posting security guards at all schools, synagogues and community institutions to ensure community members feel safe and secure living a Jewish life. Recently, the government allocated some four million euros to assist the community with security and programs to preserve Jewish life in Austria. It’s a start.

On the heels of the unveiling of the Shoah Wall of Names, I was pleased to also attend and participate in the adoption of the International Holocaust Remembrance Alliance’s working definition of anti-semitism by Austria’s National Football Association, its National Football League and by FK Austria Wien, Vienna’s soccer team. Given the incidences of anti-semitism at soccer games throughout Europe, the adoption and integration of the fight against anti-semitism is critical and necessary now more than ever.

For far too long European Jewish community presidents were afraid. They wondered if there was a future for Jewish people in Europe. While the question is still on the table, European nations are starting to aggressively confront their past. However, they must do more in terms of integrating the combating of anti-semitism into their national laws and frameworks, including prosecuting hate crimes and penalizing social media companies when anti-semitism is disseminated on their platforms.

In Vienna, Mr. Tutter now has a place to say Kaddish and light a memorial candle for his parents as do many Austrian Jewish descendants who lost family and relatives in the Shoah. Austria may have turned a corner as it faces down its own complicity in the crimes committed against its own citizens. A new generation of Austrian leaders are willing and able to confront their nation’s past. They realize that, as the saying goes, those who do not remember the past are destined to repeat it. A monument is never enough. Continued education, advocacy and social action is necessary now more than ever to defend the past and protect the future.

WE HAVE TO PROTECT JEWISH LIFE. OUR RESPONSIBILITY DOES NOT END AT AUSTRIA’S BORDER.