“The Communist leaders didn’t seem so happy. Why was the cow green? Why was the horse flying in the sky? Why? What did this have to do with Marx and Lenin?”

A large, wall-sized photograph of Lenin addressing a crowd of Red Army soldiers greets visitors to Chagall, Lissitzky, Malevich: The Russian Avant-garde in Vitebsk, 1918–1922 at the Pompidou Center. Context is important to this show, which examines the thrilling but lesser known story of the People’s Art School, founded in 1918 by the painter Marc Chagall in his hometown of Vitebsk, a small city to the north of present-day Belarus.

Chagall had witnessed first hand the outbreak of the Bolshevik Revolution from the window of his apartment in Petrograd during what was supposed to have been a brief return to his home country. The trip was initially conceived to be just long enough to collect some possessions and bring his new wife, Bella Rosenfeld, back with him to Paris, where he had been working since 1910. The eruption of World War I kept the newlyweds in Russia, but it was the immediate aftermath of the Revolution that convinced them to stay. New Soviet laws outlawing religious discrimination granted Chagall, born Moishe Zakharovich Shagal to a Hasidic Jewish family, full rights and citizenship for the first time in his life. 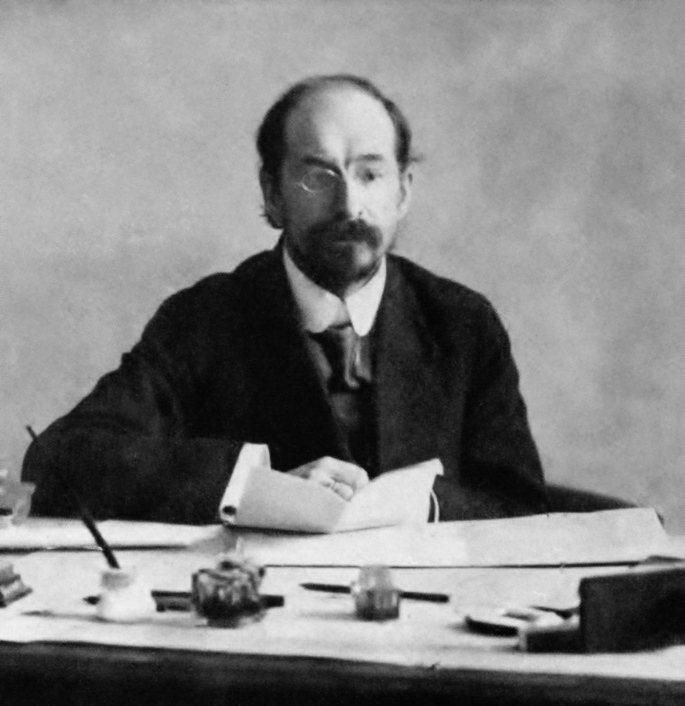 In a gesture of gratitude, Chagall proposed the creation of a tuition-free, avant-garde academy dedicated to teaching the art of a new age. In September 1918, Anatoly Lunacharsky, the People’s Public Education Commissioner (who Chagall had met during the latter’s exile in Paris) accepted, appointing Chagall as the city’s Fine Arts Commissioner, and offering him the Vichniak mansion to house his new school.

The revolutionary fervor and the painter’s personal feelings of euphoria for his new position and success are palpable in the first section of the seven that make up the exhibition. Here, we encounter several large paintings by Chagall that offer dreamlike images of him and Bella floating or flying through swirling cubist clouds and over minute cities and villages, their weightlessness acting as a visual metaphor for the couple’s carefree joy.

On an adjacent wall a silent documentary film flashes granular black and white footage of the festivities that Chagall organized for the one-year anniversary of the Revolution — his first mission as the Vitebsk Art Commissioner. In his autobiography, My Life, Chagall recalls:

All over the city my multicoloured beasts swayed in the air, swollen with revolution. The workers moved forward, singing “the International.” Seeing their smiles, I was sure they understood me. The Communist leaders didn’t seem so happy. Why was the cow green? Why was the horse flying in the sky? Why? What did this have to do with Marx and Lenin?

The painter’s observations foreshadow a tension that would arise between Chagall and his particular notion of revolutionary art — oneiric, lyric, intuitive, and highly individualistic — and the more collective and structured model promoted by Kazimir Malevich upon joining the school’s staff in November 1919. Their different approaches to art making would ultimately lead to Chagall’s begrudging departure in 1920, followed by the school’s dissolution only two years later.

Malevich’s arrival at the People’s Art School had been at the invitation of El Lissitzky, another Jewish artist who had grown up in a nearby town. Lissitzky and Chagall knew each other from their time as students in the studio of Yuri Pen, a figurative, realist painter who had offered young Jewish students an art education denied to them by Tsarist law (A “Self Portrait” by Pen styled after the self portraits of Rembrandt is nestled between an abstract “Composition” (1921) by Mikhaïl Veksler and a Cézanne-like still life by Mikhaïl Kounine in the exhibition’s second gallery.) Chagall invited both Pen and Lissitzky to teach at the People’s school in Spring 1919, as heads of the Painting-Drawing and Architecture-Printmaking departments, respectively. In October, during a trip to Moscow, Lissitzky met with Malevich, and without consulting Chagall, asked the prophet of Suprematism to join him in Vitebsk. Prior to this invitation, Lissitzky’s work very much resembled that of Chagall’s, as we can see in his series of six lithographic illustrations of the Jewish Passover song “Chad Gadya.” In “Chad Gadya” (1919), figures are characterized by their bright colors, expressive exaggerations, and dynamic postures inspired by Russian folk art.

But whereas Chagall would stubbornly continue to work in this same neoprimitivist mode until the end of his life, Lissitzky’s encounter with Malevich had a profound impact on the former’s artistic trajectory. Lissitzky developed his own unique synthesis of geometric abstraction and axonometric architectural rendering in his Proun (an acronym in Russian for “projects for asserting the new in art”) series. The exhibition presents about a dozen of these compositions in the form of paintings, drawings, and prints in a room with Lissitzky’s superb propaganda poster “Beat the Whites with the Red Wedge” (1919–1920). Lissitzky intended that the Prouns be without a specific orientation, able to be viewed from any angle or position. The visitor can experience first-hand the resulting effects thanks to a brilliant decision by curator Angela Lampe to install “Proun 6B” (1919–1921) horizontally on the flat surface of a table. Walk around the table and observe how the composition — which consists of a black circular focal point encased within a complex scaffolding of cuboid volumes in white, grey, or the neutral beige of the unpainted paper, the whole enclosed within another larger circle — appears to transform before your very eyes. Planes that appeared to designate the walls of some sort of surreal architecture become ceilings, foreshortened geometric forms that initially seemed to project out towards the viewer suddenly become tunnels leading into the mysterious depths of the image. The “Prouns’ spatial ambiguity is not just perceived visually but also felt, bodily, as the viewer’s movement in the space activates a phenomenological game of alternating concave and convex perceptions, similar to Marcel Duchamp’s “Rotoreliefs” (1935). Only, whereas Duchamp’s decorated discs were made to spin on a turntable, the Prouns transfer this movement to the viewer’s body, forcing him or her to become an active participant in the perceptual act.

Among other things, the Prouns set a precedent that kinetic artists would continue to push and develop throughout the second half of the 20th century. Although the exhibition doesn’t acknowledge the importance of Lissitzky’s legacy to the post-WWII Parisian milieu, it does present another example of the artist’s incredible foresight: a reconstruction of the “PROUNENRAUM” or “Proun room” (1923).

First presented at the Grosse Berliner Kunstausstellung (Grand Berlin Art Exhibition) in 1923, the “Proun room” applies the spatial lessons of the two-dimensional version to an actual architectural space as a means of deconstructing the stable perception of that space. Thus, the “Proun room” represents an important evolutionary step towards installation art and indeed is one of the first examples of an “environmental” artwork in the 20th century. Unlike the 1923 Berlin original, a thin thread of elastic cord prevents viewers at the Pompidou show from being able to physically enter into the space — a huge disappointment.

Geometric abstract art’s conquest of the architectural and public urban space is a major theme in the final third of the exhibition. Here, we are exposed to the output of Ounovis (another Russian acronym for “Those who affirm the ‘New’ in Art”), a group of Malevich’s most radical and dedicated students. The members of Ounovis, who wore black uniforms with a small version of Malevich’s “Black Square” stitched onto the selve, worked collectively, designing Suprematist compositions not for easel paintings (which they denigrated as bourgeois) but for the façades of buildings, tramways, street signs, and even meal tickets and wallpaper. Colored squares and triangles came to adorn all spheres of Vitebsk’s social and urban life, as did their slogans, like “Nothing old — neither in form, nor in life.” These words can be seen in Cyrillic, between long black and turquoise rectangles set on an oblique line on the side of a ghostly train car in one conceptual drawing by Nikolai Suetin “‘Long Live the Revolution !’ Plan for the decoration of a Vitebsk tramway” (1921).

The works in this section, although all labeled and identified with a particular artist, are difficult to distinguish form the typical Malevichan composition. It requires some patient looking to recognize the differences between the motifs designed by Lazar Khidekel and those conceived by Ilia Tchachnik. But the differences are there and once you notice them it is difficult to confuse Malevich’s original Suprematism with Suetin’s preference for geometries in a cooler palette, or with the baroque quality of Ivan Koudriachov’s compositions, which don’t float in subtle tension like Malevich’s but proliferate in space, spilling over one another.

In a context of frenetic excitement around Malevich and Ounovis, Chagall found himself increasingly isolated, teaching his art before a classroom of an ever dwindling number of students. In 1920, dejected, Chagall and Bella left Vitebsk to return to Petrograd. Chagall blamed Malevich for his ostracism, a grudge that the painter would hold onto for the rest of his life. Lissitzky departed shortly after, trading in his enthusiasm for Suprematism for a new obsession with the Constructivist activities of Vladimir Tatlin at the Vkhutemas (“Higher Art and Technical Studios”) in Moscow. Meanwhile Ounovis came to dominate the Vitebsk school until 1922, when its members, who dreamed of turning their collective into a political party, left for the Soviet Union’s large cities.

The exhibition concludes with a series of utopian architectural projects called “Architectons,” conceived by Malevich and his former students after their departure from Vitebsk. Consisting of long white-plaster blocks, the Architectons resemble models for skyscrapers, a black circle painted discretely somewhere near the base.  Like Tatlin’s “Monument to the Third International” (1919–1920) the Architectons represent the plans for a utopian structure that was never quite realized. In that sense, they can be seen to echo the short lived success of the People’s Art School, which Chagall had envisioned as modern art paradise, but would become, after the departure of its one and only graduating class, a wasteland for modern art dreams.

Chagall, Lissitzky, Malevich: The Russian Avant-garde in Vitebsk, 1918–1922 is on view at the Centre Pompidou (Place Georges-Pompidou, Paris) through July 16