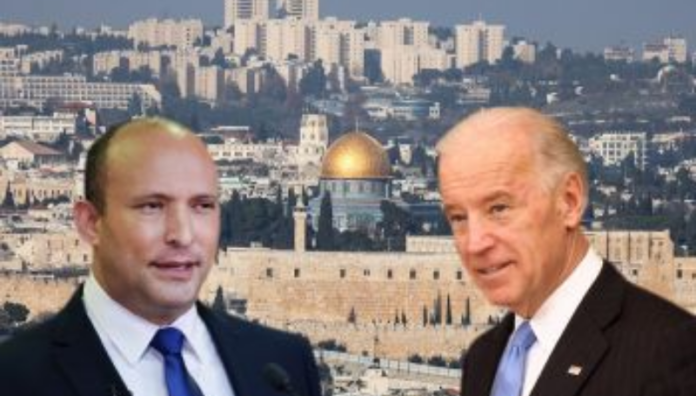 “Both the United States and Israel had the military ability to defeat their Islamic fundamentalist enemies, but only had sufficient political will necessary to keep them at bay and maintain a manageable status quo.”

The United States has definitively lost Afghanistan. US military power ousted the Taliban and prevented its return for 20 years. As forces withdrew, the product of two decades of nation-building melted away as if it never existed, save for the heaps of military hardware left behind. The collapse of America’s Afghanistan strategy highlights the risks that Israel would incur in creating a Palestinian state, as these projects hold key similarities.

First, both the United States and Israel were involved in nation-building. The United States sought to build an Afghan democracy capable of governing Afghanistan and maintaining peace and stability. Since the Oslo Accords, Israel has been working with America to build a Palestinian democracy capable of governing a future Palestinian state and of making peace with Israel.

Both of these efforts involved building and training armies capable of suppressing terrorists. Both involved introducing Western-style democracy into regions without prior experience with it. And both sought to defeat and marginalize well-organized Islamic fundamentalist groups with a strong sense of purpose and robust networks of support. Both attempts at nation-building ultimately failed.

In Afghanistan, the corrupt US-backed government never had much legitimacy, and its military quickly dissolved when US forces withdrew. The corrupt Palestinian Authority never enjoyed legitimacy either. Its US-trained forces were swiftly routed by Hamas when the Israel Defense Forces withdrew from the Gaza Strip in 2005, and it lost an election to Hamas in 2006. To the north, the forces that Israel backed in Southern Lebanon were quickly defeated by Hezbollah when the IDF withdrew in the spring of 2000. History demonstrates that organized, internationally supported and motivated Islamist groups usually win in power vacuums.

Both the United States and Israel had the military ability to defeat their Islamic fundamentalist enemies, but only had sufficient political will necessary to keep them at bay and maintain a manageable status quo. For Israel, international pressure and low domestic tolerance for casualties drove it to risk its security by removing its forces from Gaza and Lebanon. The botched US withdrawal from Afghanistan was an unforced error. There was no major domestic or international demand for America to withdraw its remaining 2,500 troops immediately. In fact, international allies were left blindsided by US President Joe Biden’s rapid pullout. No US soldier had been killed in combat there in more than 18 months, and the cost of maintaining an effective counterterrorism base of operations was sustainable.

The US decision to withdraw under minimal pressure bodes ominously for countries that are promised protection. Will that protection be rescinded when there really is pressure? After the United States appeared to flee before its own shadow, abandoning billions of dollars of sophisticated equipment to an enemy with no air force, no satellites and no nuclear missiles, are Taiwan and South Korea still truly confident in protection if nuclear-armed dictators come knocking?

In 2014, US Secretary of State John Kerry offered Israel technology and promises of international protection if it withdrew its military from the strategically important Jordan Valley to allow a Palestinian state to include that territory. The US withdrawal from Afghanistan suggests that Israel was right to rely on itself.

Both Democrat and Republican US administrations promoted the “two-state solution,” which in essence sought to nation-build in the Middle East. The Trump administration was the first to break with that thinking, which had persisted since Clinton. The Biden administration is back to the old playbook. It officially supports the creation of a Palestinian state. From Clinton’s Oslo Accords to George W. Bush’s “roadmap” and “disengagement,” the United States has reassured Israel that a future Palestinian state would not pose a security threat.

However, America’s poor track record at nation-building in the Middle East is mirrored by its poor track record predicting outcomes in that region. The Oslo Accords ended in a bloody intifada; disengagement from Gaza ended in Hamas capturing the coastal enclave and turning it into a terror platform. De-Ba’athification in Iraq ended in a bloody insurgency, and the withdrawal from Afghanistan yielded a rapid Taliban victory that apparently caught the Biden administration by surprise.

The world now has one more fundamentalist Islamic state: the Taliban-run Islamic Emirate of Afghanistan. There is little doubt a future Palestinian state would be the same. According to recent polls, Hamas would still win Palestinian elections, but in the Middle East, more important than ballots are bullets, as the 2021 Taliban takeover of Afghanistan and the 2007 Hamas takeover of Gaza clearly show.

The US military kept the Taliban at bay in Afghanistan, and the IDF keeps Hamas from taking over Judea and Samaria.

While a fundamentalist Islamic victory is surely a tragedy for liberty, tolerance and human rights, it is first and foremost a security threat. A Taliban-run Afghanistan harbored Al-Qaida, resulting in the attacks of Sept. 11, 2001. Many fear that it will once again become a safe haven for terrorists and that the next big attack is only a matter of time.

For Israel, a Hamas-run state bordering Israel’s major population centers, economic centers and an international airport would pose an existential threat. All of Israel would be within range of a variety of short- and long-range rockets, mortars and sniper fire, and easily infiltrated through tunnels. In the 21st century, oceans are no guarantee of national security, but at least for now, the Taliban or Al-Qaida cannot fire volleys of rockets at Washington, DC, from Afghanistan.

The US withdrawal from Afghanistan tells the world’s dictators and terrorists that America is no longer interested in its post-World War II role as the military guarantor of freedom. Any country would be wise to understand that it can ultimately only rely on its own power. “The strong do what they can, and the weak suffer what they must.” If Israel severely weakens its ability to defend itself by withdrawing its forces to create a Palestinian state, then it must understand that it will assuredly be left to suffer what it must when that state falls to Islamic fundamentalists, as history and the facts on the ground strongly predict.